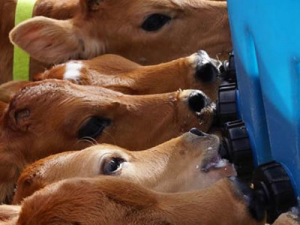 In a first for the Agricultural Fieldays, New Zealand company BioBrew is showcasing CalfBrew, a live animal probiotic.

"There really is nothing else on the market like it, not just in New Zealand but in the world," says BioBrew co-founder Andre Prassinos.

"The microbes in BioBrew products are selected to survive the rigors of the digestive system, including stomach acids and bile salts. They do their job over the entire trip through the digestive tract."

In a recent three-year farm trial conducted by BioBrew in conjunction with Clutha Agricultural Development Board, animals treated with Calf Brew grew 39 grams/day faster than the calves in a control group. These same calves had increased survival in the herd and produced more milk than the control group.

The key to CalfBrew’s efficacy is the use of live, fresh probiotic microbes.

"But traditional probiotic supplements are in a freeze-dried state that destroys much of their efficacy."

BioBrew’s live probiotic product was developed when Prassinos met co-founder Don Pearson at Lincoln University. Pearson was disillusioned with the limited effectiveness of freeze-dried probiotics, and wanted to create a better product.

"We had two major tasks in creating BioBrew," Pearson says. "First we had to isolate ideal bacterial colonies for each animal type. Second, and most important, we had to create an effective delivery method that keeps the bacteria alive in a liquid product so that it is 100% effective."

A four-year R&D effort at Lincoln University, supported by Callaghan Innovation, helped the company to create a "brew" for each animal group. Every recipe has a unique balance of bacterial strains designed to support optimal gut health for each species.

Since launching, the BioBrew product has received interest from the US, where the EquiBrew product is now used by top Kentucky breeders and vets. BioBrew are now looking into creating a recipe just for the human market.

The response from farmers involved in the trial was emphatic. "Once we changed to CalfBrew we noticed a marked improvement in the calves," says Ivan Deeds, farm manager at Bellevue Enterprises Ltd.

"Right from the start we saw that gut health and growth rate was better. We have hardly any scouring now."