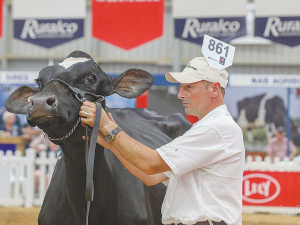 New Zealand Holstein breeders are offering their best for the Autumn Harvest Sale at Cambridge Raceway in April.

Up to 60 live lots and embryos will sell in an evening sale run by Dean Malcolm of Bluechip Marketing.

Malcolm believes there is a huge hole in the registered market for a sale like this.

“Things are still moving in this country. I know it can work, and there are many ways to make it work,” he says.

“We’re using all independent cowmen – not only breeders – but also a team that have been in this industry all their lives.”

The sale will kick off with pre-sale drinks and nibbles, and finish with the raceway’s restaurant opening for diners.

Malcolm says lots are coming in from throughout New Zealand and internationally, resulting in a full catalogue.

“People know that we can get sales done; we’re targeting all breeds and there will be some strong cow families included from around the world that aren’t represented in the Southern Hemisphere, let alone in New Zealand.”

And he expects the global industry will be watching.

“I think it’s important to note that there are cow families that are just as good in New Zealand as internationally. And, with the power of marketing and promotion, we can shine a light on those individuals.”

The Australian cowman – who has settled in New Zealand – is a former co-owner of Australia’s well-regarded Bluechip Genetics. Bluechip was Premier Breeder at International Dairy Week nine out of 10 years, during which time it led the way in sale averages, with prices peaking at A$101,000.

Te Hau’s Tom Bennett said it was a no-brainer for them to get involved.

Holstein Friesian cow of the year

HOLSTEIN FRIESIAN breeders Wayne and Leeanne Taylor are humbled that their cow, Muritai Dalton Wattle EX 17*ET is the inaugural 2012 Valden cow of the year.