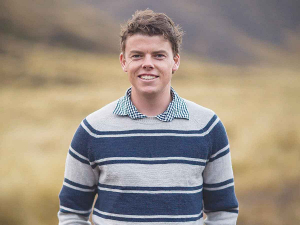 Waugh, 27, a former NZYF board member, took up the role last month at the Donald Pearson Farm.

The position is sole charge with responsibility for managing the farm, reporting to the board and hosting visitors.

Donald Pearson Farm (DPF) board chair Julie Pirie says it was a long process to find the right candidate for the role.

“The successful applicant needed to be well organised, a good communicator and enthusiastic because the role of farm manager is effectively our chief executive officer,” she says.

The DPF board was hoping to attract a NZYF member to the role, she adds.

Waugh has served as chairman of the Lincoln Club, Christchurch District, Tasman Region and a previous NZYF board member.

“The late Donald Pearson was hoping that his farm could be managed by a NZYF member looking to learn skills of a dairy farmer and help the next generation. I think he would be proud to see Sam on his farm, fulfilling that wish,” Pirie says.

Raised on a dairy farm and feed mill in the Manawatu, Waugh holds a Bachelor of Agri-Commerce from Lincoln University.

Excited to start a new challenge with the Donald Pearson Farm, he says it’s a privilege to have been appointed.

“I have a broad range of skills that I bring to farm with knowledge from a wide variety of different farming systems, and I’m keen for a new challenge. I am also very excited to be involved with developing the farm both from a farming perspective, but also in its role of encouraging the younger generation into the agricultural sector.

“I really believe the Donald Pearson Farm can be a great asset to our industry, so I feel very privileged to have the chance to be involved with that,” he says.

He brings four years’ experience as a Dairy Farm Advisor with Farm Right in Canterbury as well as two years working in different farming systems in the United Kingdom with wife Liana.

“I worked on a 3,500 hectare cropping farm in the UK where the business was also developing a small beef unit.

“They operated a commercial grain store, did straw bale contracting where they bale about 100,000 bales per season and ran a large game bird shoot. During my time in the UK I learnt a lot about farming systems in the northern hemisphere, and gained a much greater appreciation for the way in which we farm in New Zealand,” he says.

Speaking of his involvement with Young Farmers, Sam Waugh says he first became a member when he moved from the Manawatu to Lincoln University on the day of the February Earthquake.

“All of the roles I have had within Young Farmers has provided a huge learning for me, and has helped me make great friendships across the country,” he says.

The new chair of New Zealand Young Farmers Jessie Waite says her key focus over the 12-month tenure will be to continue the organisation’s growth.

New chair and board members for New Zealand Young Farmers

The AgriKidsNZ Grand Final is expected to be a hot competition, with 63 competitors all battling it out for the national title in Whangarei from the 7th to 8th July.

Mentors can make a huge difference