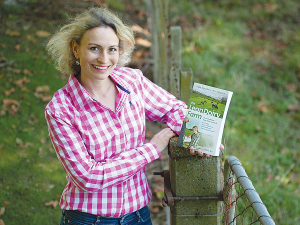 What could the tachinbo, kaizen and ishikawa techniques of a Toyota assembly plant offer to a Kiwi dairy farm?  Plenty, says Jana Hocken, in fact enough to fill a book.

Hocken is the author of a new book called The Lean Dairy Farm (400 pages).

She wrote the book after running workshops with 100 farmers in New Zealand two years ago.  Now she runs Lean workshops for Dairy Australia in Tasmania, with the prospect of also rolling it out to Victoria and Western Australia.

She had been a “city girl through and through” when she and husband Mat returned to New Zealand in 2013 to run the Hocken family’s 1000-head dairy farm in the Manawatu.

“Farming was new to me but I was soon seeing the same kinds of things I’d seen in other industries overseas – a lot of wasted movements, the same problems cropping up again and again but not being solved.”

She knew the Lean thinking and methodologies she’d introduced to companies and organisations in Europe, US and Australasia – in banking, IT, manufacturing, health care and even a navy.

She knew they could work onfarm.

Her book outlines, with humour and real life examples drawn from the family farm, how Lean can reduce costs, save time and boost quality, and cut stress, frustration and work hours.

Lean is a way of shedding the unnecessary, by continuous improvement and relentless systematic elimination of waste time and resources.

“The Toyota production system is Lean, it’s where the Lean concepts come from.”

By restocking ‘shelves’ based on customer demand, Japanese engineer Taiichi Ohno developed the Toyota production system (TPS), propelling the company to No 1 internationally.

The authors of a 1990 book about Toyota, The Machine that Changed the World, described TPS as “lean production”, a management approach adopted by almost every industry sector.

“As soon as you start at Toyota you become integrated into this way of thinking,” Hocken says.

From Australia she went to Belgium to become a TPS specialist focusing on engines and transmissions, helping suppliers as large as Bosch to get their systems into Lean mode.

She became a Lean consultant to other industries but then met Mat, a fourth-generation Kiwi farmer who had been in international policy work overseas.

Fast forward to Manawatu on a winter night.

Hocken wakes at 1am and Mat still isn’t home.  She eventually finds him in a shed trying to help a cow to calve.

“He asked me to go find the calving pulley that was somewhere near the platform at the other shed -- at 2am, in the rain and wind, six months pregnant, in my dressing gown.

“I remember thinking ‘This is ridiculous. Why isn’t there a standard place for this thing so it can easily be found when you need it’?”

“I often get asked whether this is just for big farming operations but Ireland demonstrates that’s not so.  The farmers there often have herds of 50-100.  Many are husband and wife businesses but they see what Lean can do for them.”

In a way, Lean principles are even more relevant for smaller operators, she says.

“A big battle onfarm is long days.  When you realise that so much of the frustrating stuff that happens could be avoided in the first place, with better processes and so on, we can get that better work/life balance.”

Hocken says as much as 95% of what happens on farms is wasted effort. Waste is anything that doesn’t add value from the customers’ point of view.

Reasons may include overcomplicated or inefficient processes, team members’ misunderstanding of farm status and plans, spoiled inventory and non-standardisation.

“So why aren’t we all doing it?  The beauty of Lean methodology is it’s simple, practical stuff that pretty much anyone can do.

“It’s used successfully by hundreds of thousands of businesses worldwide but you need to know how to go about putting it in place and sustaining it.”

She believes many businesses think they can best add to the bottom line by introducing flash new technology.

“Of course it can help, but if new technology and equipment is just dumped on top of poor processes, the owners often end up wondering why they’re not getting the results they anticipated.”

Particularly tricky is achieving the “cultural element” – getting staff on board with different ways of doing things and making that stick long-term.

The book is a manual for farmers to open up conversations with their staff.

“That’s a weakness in farming,” Hocken says. “A lot of other businesses focus on work culture and they might have an entire HR department.

“People get into farming to be outdoors, to get away from people and their problems.  But dealing with people is becoming more and more part of our business and it’s vital to engage people around you and get the best out of them.”

• Simon Edwards is a communications advisor for Federated Farmers.