NZ ticks the boxes for Brits 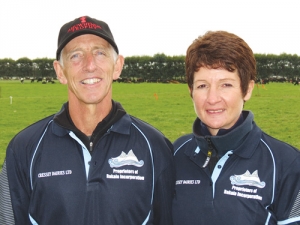 Mark and Julie Cressey say they have the best sharemilking job in New Zealand.

They are now into their ninth season as the sharemilkers on the Rakaia Incorporation's Tahu a Tao dairy farm, a finalist in the Ahuwhenua Trophy competition to determine the top Maori dairy farm.

When the job was advertised the shareholders then on the farm told them it was the best sharemilking job in the country; the Creeseys agree.

They have spent 11 of the last 12 years in NZ working on Maori farms.

Their story starts in England where Mark was running the family dairy farm; they had reached a crossroads because it wasn't sustainable and there was family politics.

"We were looking at where we could further our dairying career. Dairy was what I knew and enjoyed but we didn't fancy Europe because of all the bureaucracy and subsidies. We researched NZ via Dexel and we thought it was pretty good there and that the average operator was doing a good job.

"We didn't want to be average so we backed ourselves to be better than average; we came to NZ for six days to see what it was like."

Julie says she instigated the change.

"As a family we needed to look to the future, and I got us looking overseas. We looked at Canada and were going to look at the US, then a neighbour pointed us towards NZ."

Mark says they were determined to be objective about the options but when they came to NZ they knew straight away this was the place for them. So we decided to come here.

"The family didn't take it at all well. Julie's family were a bit disappointed to lose their daughter, but my family... had a dream of the sons being on the farm and I was the last son on the farm.

"So all the cows were sold in September, my father died in October and we left on November 1, so it was a tough time."

The first job they landed was with Wairarapa Moana, at Mangakino, a trust chaired by Kingi Smiler. The Creeseys wanted to find people who could teach them the NZ pasture system. They spent a season on another nearby farm in the King Country before applying for and getting the job at Rakaia.

At the same time they sold their house in England and made NZ their home. "We love it; this is home now," says Julie.

For Mark, working for Rakaia is the perfect job. He says the Incorporation has been supportive, doesn't interfere on day-to-day issues and has acted on their recommendations to improve some farm infrastructure including staff housing.

"The support they give us, in the sense of welcoming us into their family, is absolutely great," says Julie. "We see them only once a year, but we have always had a great day with them and a great relationship. It's nice that they have opened their farm to us and accepted us. It works both ways because they are dealing with our culture as well."

Arriving in NZ, Mark wondered how he would motivate himself, having come from a farm that had crops and pigs as well as cows. But he says the challenge of managing pasture is great, as is seeing the bank balance grow.

The Cressey's have not stopped at their 50/50 sharemilking role at Rakaia.

"If you understand financial aspects of the business and you are financially savvy you have to accept it – life's tough. We have a helluva lot more debt than we had and life's a lot tougher for us now but you have just got to understand that."

The answer, says Julie, is being proactive and making good decisions.

The Cresseys have four years left on their contract and want to see it out.

This tough year is the time for young people to get the foot in the door to sharemilking, says Feds sharemilker chairman Neil Filer.

Wise use of land, labour and capital

Ashburton sharemilkers Sara and Stuart Russell have always tried to make their dairy operation as sustainable as possible.