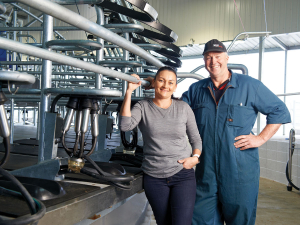 John and Debbie Moorby in their new dairy plant.

“For the size of the herd, we were always going to need a big rotary,” Moorby said. “We’ll get more throughput and be able to cut back on time in the parlour.”

He reckons it’ll take about four people to manage cows through the rotary, versus six on their old system with its two herringbone sheds.

“We’ll have two people putting on cups, one person keeping an eye on things and one person getting the herds in.”

The technology fitted to the Centrus will make milking easier for the Moorbys, says Waikato Milking Systems. It includes the company’s ECR Plus system -- a cup remover which also collects milking data from other gear installed on the platform.

One of these is SmartD-Tect, which simulates pre-milking so cows let their milk down faster. It also warns early of possible udder health problems, reducing treatment time and cost.

Another is the BailGate control system which manages cows on the platform. The straps of the BailGate can be lowered or raised automatically when the cup removers are activated.

The Moorbys also have SmartSpray teat spraying in each stall.

Ideas from other dairy sheds have found places in Moorbys new dairy.

These include a carpeted staff room with kitchen table and chairs, which opens to a viewing platform where visitors can watch cows being milked.

“We wanted to provide a good environment for our staff where we could all meet together, interview new staff if needed or just come and have a cup of coffee,” Moorby said.

“The viewing platform is for anyone who wants to come and look at how things work at milking time.”

The Moorbys progressed through the industry as 50/50 sharemilkers for 15 years. Then they bought a 130ha farm in 2001 near Te Awamutu.

“Then we sold that and bought a 130ha property to start out on our own. Over the years the property size and our herd have grown.”

John runs the milking and manages the staff and herd, and Debbie manages the business office, calf rearing and relief milking when needed.

They are proud of how they’ve developed their dairy business together while also raising a family. They have three adult children all working off farm. One is a teacher, one a journalist on her OE and one is playing rugby for Southland.

Moorby says the new plant will allow him to increase the herd size if needed.

“But also at 53, I don’t want to be milking fulltime much longer. The technology we’ve got on the platform will help me keep an eye on how well things are going.”