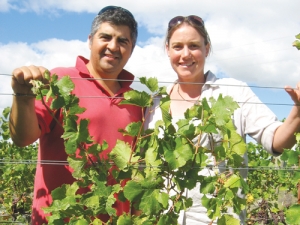 Although Hawke’s Bay’s Crownthorpe district is a significant producer of cool climate grapes, as Monowai Estate’s owner-operators point out, it largely goes under the radar.

“Matapiro and Crownthorpe is probably the second biggest winegrowing area in Hawke’s Bay,” says winemaker Emma Lowe, “but we’ve joked about it being its best kept secret.”

Crownthorpe’s high altitude terraces and flats have been targeted by some of New Zealand’s biggest winegrowing interests, and are set to become much more recognised with the recent purchase by Delegat’s Wine Group (see page 16).

Emma’s parents, Lynette and Norman Lowe, were among the first to recognise the area’s grape growing potential. The couple, who farmed in the Waikato and then at Kereru, south of the Ngaruroro River, are now retired in Napier.  But, keen to lure their globe-trotting daughter back to New Zealand’s shores, they suggested a wine business as a family venture.

The Lowe seniors funded the enterprise and assist as needed on the 28ha property, while Emma and her husband, viticulturist Marcelo Nunez, live and work on site.

Delegat’s was at the forefront of Crownthorpe’s development as a winegrowing sub region, planting Hawke’s Bay’s largest single vineyard, some 350 hectares, in Merlot and Chardonnay in 2001.  The Lowes followed a year later, and since then Pernod Ricard, Constellation Brands and Sileni Estates have all established vineyards in the area.

Emma says it starts with the soil – free-draining silt loams over river gravels.  “It’s got proximity to the river so we’ve got irrigation and then the climate for the aromatic varietals and those early ripening varieties.”

As harvest was nearing, the temperature at this altitude dropped 10-12 degrees at night, lengthening the ripening period and encouraging flavour development.  And Dave points out that summer’s daytime temperatures here are higher than for other parts of Hawke’s Bay with Crownthorpe beyond the cooling reach of the sea breeze.

Initially, Emma felt Monowai’s riverside location provided enough slope to avoid frosts.  That didn’t prove to be the case, however, with one corner of the vineyard, sloping back a little, suffering some damage in the early years.  Since installing two wind machines there have been no further problems.

A qualified winemaker with 10 years’ experience in wine regions around the world, Emma makes single varietal wines from Monowai’s Sauvignon Blanc, Pinot Gris, Chardonnay, Pinot Noir and Merlot in the on-site winery she designed to take advantage of the slope of the land.

Her parents moved to farm in Hawke’s Bay in her final year at high school.  Interested in pursuing her interest in science, she was drawn to a future in the wine industry she saw thriving in the region.

“I didn’t want to have a job where I was stuck in an office all day and so I thought this was a good job,” she says of winemaking.  “It’s got a lot of things going on”.

Enrolling at Adelaide University, she graduated in 1996 with a Bachelor of Agriculture majoring in oenology.

A year as an exchange student at the University of California, Davis was to trigger “a rather big OE” , with Emma working vintages in Australia, Switzerland, South Africa, the Rhone and Loire valleys and Chile, which is where she met Marcelo.

It was while she was making wine for Vinho San Pedro in Chile that her mother rang to ask if she was up for a new adventure.

“So that was when we came home,” Emma laughs.  Marcelo, who “gathered” viticultural knowledge after studying horticulture, arrived in New Zealand on a fiancé’s visa by which time the land for the winegrowing venture had been purchased and cleared.

Emma says her parents “pretty much” left the decision-making about varieties to them both.  “So we were basically looking for early-ripening varieties knowing that this has got a bit of altitude here, it’s cooler.”

Apart from bottling, everything associated with the wine production is done on site.  Trying handpicking for several seasons, they found labour was unreliable and now use a contractor to harvest the grapes.

“The quality of grapes that comes out of harvesters is just amazing,” says Emma. “I can remember when I first saw machine-harvested fruit and you’d have half a vine, the stuff that wasn’t grapes, there was a lot of it.  But now they pick really cleanly.  We don’t see any big benefit in hand harvesting.”

Last year, the winery processed 230 tonnes from the 22 hectares of vineyard.  Taking advantage of gravity, the fruit is unloaded at the topmost level of the stepped building.  The barrel hall is carved into the bank, below the administrative area, helping maintain a steady temperature for the aging wine.

Running the winery single-handed for the first seven years, Emma says she put a lot of thought into making it labour efficient.

“I basically did the design and modified it a bit after seeing what works and what doesn’t work.”

Satisfied with the quality of her wines, Emma sees marketing as the company’s biggest challenge.  It’s the reason Dave has joined the team.

Historically, he says, Monowai has been more focused on developing export markets in the USA, Canada, the UK, Europe, southeast and northern Asia and Australia.

The aim is strengthen its marketing channels while also boosting the company’s domestic presence.

Emma agrees the latter is no easy task, given the lack of passing traffic and Crownthorpe’s low profile as a wine-producing area.  However, she points out, Delegat’s has a label that identifies the Crownthorpe Terraces as the wine’s place of origin.

Dave says the domestic push will see greater focus on Emma as the winemaker.

Raising a young family and enjoying strong ties with their community, she and Marcelo feel happily settled in this comparatively out-of-the-way corner of Hawke’s Bay.  And as more wine producers pick up on what the sub-region has to offer, it seems Monowai Estate and Crownthorpe are destined to become more firmly stamped on the region’s wine map.