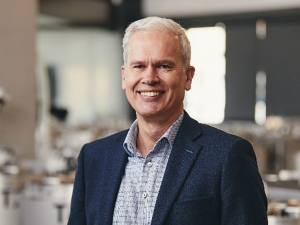 The new boss at Bragato has long been “a closet science geek”.

Jeffrey Clarke has been appointed as Chief Executive at the Bragato Research Institute (BRI), after serving three months in an interim capacity. “Once I started the role I found it really interesting and energising,” says Jeffrey, who has worked as General Manager Advocacy and General Counsel at New Zealand Winegrowers (NZW) since 2014. “BRI has great people with really good breath of experience. They have ideas and want to make things happen for industry,” he says. “I got infected by that.”

Jeffrey’s childhood love of science was fed by the Scientific American magazines his father had around the house. “Back then I could understand maybe one tenth of some articles, but I was still fascinated by the constant new discoveries, and the world it revealed.” He didn’t continue with science on leaving high school, studying law instead. “And actually, that’s one of the things that is quite refreshing coming into this role,” he admits, noting that in his NZW roles he could do everything his staff were doing. “Whereas this role is more strategic; I’m not a researcher so the value I can add is to help enable and steer the work my staff are doing, so it’s a really different engagement.”

He’s also excited by the stage the BRI is at, with the Lighter Wines project finishing up and some major new programmes nearly ready to launch. “And it’s a really exciting time, because the original establishment period for BRI has come to an end, we’ve built some impressive capability, and now we have to show that we can stand on our own two feet and deliver impact for our members.”

It’s a time where engagement with members is key, and so is engagement with Government officials, ensuring they understand “what we do and why members want us to be doing it”, says Jeffrey, who will split his time between the BRI base in Marlborough and his home in Wellington, working with staff and industry on one side of the Cook Strait and Government on the other.

Jeffrey says the record attendance numbers at Grape Days supports the feedback BRI and NZW get from members. “What we hear consistently is that members rate NZW’s research programme highly, and they are telling us they want more.”

BRI Board Chair Mark Gilbert says the appointment will carry BRI forward in terms of meeting its strategic imperatives, developing staff and delivering science outcomes applicable to the vineyard and other aspects of winemaking. “New Zealand is recognised as a leader in this industry. With new and additional funding, along with some exciting projects coming on stream, BRI is well positioned to continue to contribute to this exciting industry.”

Fermentation expert and yeast supplier Fermentis has signed on as a gold sponsor of the Bragato Research Institute research winery, giving it naming rights to the boardroom.

Getting science to work in the field requires some give and take, says Bragato Research Institute viticulture extension and research manager Len Ibbotson.

A selection of New Zealand's most exciting wine research will be presented at the upcoming Grape Days events around the country.

MJ Loza has resigned his role as chief executive of the Bragato Research Institute (BRI), to move back into the industry.