Improving our readiness for Pierce’s Disease 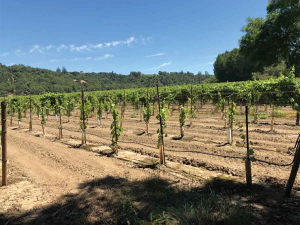 Replanting vines near a riparian boundary in Sonoma County.

Throughout northern California wine producers have dealt with Pierce’s Disease, caused by the bacterial pathogen Xylella fastidiosa, for over a century.

The presence of Pierce’s Disease has an ongoing impact on viticulture but has not stopped vineyards in Napa and Sonoma county from being some of the most valuable and profitable agricultural land in the entire United States. During July New Zealand Winegrowers visited California in collaboration with Wine Australia, to learn more about the impact of this disease on viticulture and the ongoing state sponsored management programme, as well as investigating the latest research underway to mitigate the impact of this disease.

The threat of Pierce’s Disease

Pierce’s Disease is one of the wine industry’s highest threat biosecurity risks. The disease blocks infected plant’s xylem tissue preventing the movement of water from the roots to the canopy. Plants typically shows signs of water stress; with accompanying loss of productivity before eventual death. While there is no known treatment for the disease, there is some evidence of cold curing where cold winter temperatures reduce the amount of bacteria present in an infected vine.

Xylella fastidiosa is vectored by xylem feeding insects, such as sharp shooters and spittle bugs. The disease has a very wide host range with hundreds of different plants being recognised hosts, but not all these host species display disease symptoms. New Zealand is currently free of Xylella fastidiosa and is also free from any sharp-shooter species. Nonetheless, New Zealand is home to a range of xylem feeding insects and one, the meadow spittle bug, is prevalent throughout vineyards in many growing regions. The most likely entry point for the bacteria is on infected plant material. New Zealand has strong quarantine laws that mitigate risk posed by plants on the commercial pathway but preventing smuggled material from entering New Zealand is much more challenging. Overall, while the likelihood of Xylella fastidiosa entering New Zealand is relatively low, the potential consequence for the wine industry could be extremely significant.

Xylella fastidiosa was first identified in California in the 1880s. California has a range of native vectors, in particular the blue/green sharpshooter, and the local wine industry has always suffered localised losses. This all changed in 1994 with the arrival of a new vector, the Glassy Winged Sharpshooter (GWSS), likely imported to California on citrus nursery stock from Florida on the US east coast.

GWSS proved to be a much more effective vector than native species and its introduction caused extremely significant losses in vineyards across southern California. In response the Californian state government established the Pierce’s Disease Control Programme. This programme is focused on preventing GWSS from establishing in northern Californian wine regions. Since its inception in 2000 the programme has been very successful in limiting the spread of GWSS. The programme has implemented a dedicated surveillance and incursion response capability and a nursery accreditation system that regulates the movement of potential risk goods. The programme has also concentrated on delivering first class extension services that promote awareness and provide risk management advice. By any metric the programme has achieved its objectives and has helped to ensure the sustainability of the Californian wine industry.

Despite the success of the programme Californian growers still suffer annual losses caused by native vectors. Vineyards that bordered rivers and creeks or had significant drainage ditches were typically the most heavily infected, with up to 12 rows from the border being impacted. Many affected growers have attempted to mitigate the impact by setting up a physical barrier, removing habitat or even covering threatened vines with kaolinite clay to make them less inviting for vectors to feed on. Most of these management activities have limited effect, with growers replanting each season to reduce the risk of vectors moving deeper into the vineyard in search of feeding sites. In effect, these replanted vines serve as a buffer, soaking up the attention of the vector insects who live in the riparian area. For some growers this constant replanting is a significant drain on profitability.

New Zealand Winegrowers chairs the Xylella Action Group, a partnership between MPI and a range of industry and other stakeholder groups who are working together to improve New Zealand’s readiness for an incursion of Xylella fastidiosa. Recently, Plant & Food Research delivered an excellent research report: Risks to New Zealand’s primary industries from Xylella which outlined the potential impact of the disease on a range of New Zealand’s horticultural industries. For the wine industry, the report highlights that the impact of Pierce’s Disease could be extremely significant, particularly in North Island wine regions with warmer winter temperatures. This report is available on the New Zealand Winegrowers website.

While there is still much uncertainty regarding these impacts, particularly in a changing climate, the report enables those industries that are most likely to be impacted to better partner with MPI to improve collective readiness. Together these groups will work to identify research questions and contingency plans to help mitigate risk.

Conclusion – Be a biosecurity champion

While at this stage the threat posed by Pierce’s Disease raises more questions than answers the Californian experience highlights that it is still possible to grow grapes profitably and make excellent quality wines in the presence of the pathogen. At this stage the best thing individuals can do is to mitigate risk by improving the effectiveness of supply chain biosecurity and by implementing the New Zealand Winegrowers biosecurity best practice guidelines on their property. While these measures won’t prevent Pierce’s Disease from establishing in New Zealand it will help to mitigate the impact and build a higher degree of resilience into the wine industry.

Don’t forget if you see symptoms, or anything unusual in the vineyard call the Biosecurity New Zealand hotline 0800 80 99 66 to report your find and also let the New Zealand Winegrowers biosecurity team know on This email address is being protected from spambots. You need JavaScript enabled to view it..