Going with the flow to combat trunk disease 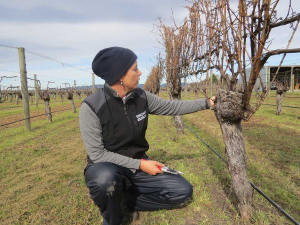 “I’d like you to start thinking of the vine as a living thing”, she told a group of growers eagerly huddled mid-row in Marlborough recently, when she visited for a workshop and pruning demonstration.

Fischer emphasised the need to ensure vascular health from the root up, using a controlled branching structure, small cuts and protective wood to minimise and mitigate the impact of desiccation. The objective was to reestablish uniformity, improve quality and production, extend vine age and reduce susceptibility to trunk disease, by respecting the vine‘s own natural defence mechanism, taking into consideration the area allocated for it to grow into in its lifetime, she said. “Year-on-year pruning results in desiccation - the quality and quantity is determined by the pruner with each cut annually made to the plant structure.”

Simonit & Sirch is an Italian training and consultancy company that has spent more than 30 years researching vine health and longevity via winter pruning and spring shoot thinning. Its pruning model is based on the formation of a sturdy branching structure and incorporating cut separation by keeping cuts on one side of the vine in cane pruning , so that sap can flow unimpeded on the other.

Once growers had forged the desired structure, decision-making became simple, with an established procedure for where year-on-year pruning cuts could be made, she said. The quantity of cuts needed would be reduced to a minimum, speeding up the process in winter and spring. “It’s a clear message for the pruner and the plants, so it is a lot easier.”

Fischer wielded Felco 13 Secateurs as she demonstrated in the Farmlands/Marlborough Grape Growers Cooperative Innovation Vineyard, and turned down offers of larger loppers to take out canes, explaining that no one should need them for a well-structured vine. Small cuts reduce desiccation (dead wood) and heal sooner, putting less pressure on the plant and providing a smaller entry point for pathogens like Eutypa.

Looking at an older vine with damaged head and non-uniform canes, Fischer described how in restructuring the vine, a well-positioned “anchor” could be used to encourage uninterrupted sap flow along the “productive highway” of the plant. “The position and quality of living wood on the structure can act as a stopper to the accumulated desiccation,” she said, advising growers to never cut flush to the trunk, but instead to utilise the vine’s own defences by focusing on cut quality.

Adapting Marlborough pruning styles to the model will require a change in mindset, but can begin with a “gentle shift” in which people “start seeing their vines”. She demonstrated on six-year-old vines with an abundance of dead wood and crowded canes of various diameters. “When you go into your vineyards, consider vine structure for the future by looking at your plants and thinking about the build-up of living wood. Living wood is vital to the sustainability of a vineyard and it cannot grow where there is dead wood.” Current pruning practices result in a “randomisation” of many cuts to the plant structure, resulting in big cuts made to control growth, she said. That increases the risk of pathogens entering the plant structure, “resulting in premature vine decline”.

The risk of Eutypa was revealed at the demonstration, when older vines were cross-sectioned with a chainsaw, revealing the extent of trunk disease and dearth of sap movement. “They were basically beyond repair,” says Mart Verstappen, technical leader viticulture at Farmlands, which sponsored the event. People had pruned on price for decades “and at the end of the day you get what you pay for”, he says. The cost of adopting the pruning model was discussed during the day, with an acknowledgement that it will take time to establish the necessary structure, says Verstappen. “But what is the true cost if you don’t do it?” With many Marlborough vineyards being removed and replanted due to trunk disease, it is a perfect time to look at a better way forward, he adds.

3 Reduce cutting surfaces and respect the crowns - make small cuts on the same side on one or two-year-old wood.