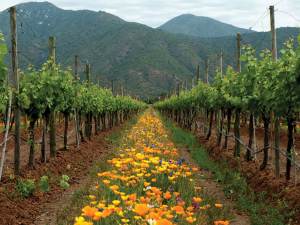 With 1300 ha, Chile’s Emiliana Vineyard is the world’s largest organic and biodynamic wine producer. Tessa Nicholson discovers that going organic on a large scale means you have to get past all the reasons not to.

Emiliana Organic Vineyards GM admits there are plenty of reasons for not going organic and biodynamic, if you want to look for them. But Christian Rodrieguez says not too many of them have foundation in this day and age.

The most commonly asked question he faces is why would a company that was successfully growing conventionally, want to go down the organic and biodynamic track?

His answer – why not?

“When you have been doing it for 20 years and are used to it, you wonder why you would be conventional today,” he says.

Emiliana began back in 1986 and through until 98 was conventionally farmed. They were building a growing export market, particularly in the US, and in total produced 1.7m cases of wine.

“It was a very simple but profitable business.”

But in 1998 the owners began considering going organic, after seeing how conventional farming was affecting the workers. The process began with an experimental block – out of the 10 vineyards, they chose the very best 40-50 ha. In 2001 the first certified organic fruit came in and they decided to produce a new wine – a blend of six varieties – which was aged for 13 months prior to release. The wine, Coyam, hit the market in 2003 and within six months had won the best blended wine and wine of the show, at the Chile Wine Awards.

“Nobody was expecting that,” Rodreiguez says.

It was the impetus needed to start the transformation of the entire 1300ha of vineyard.

It hasn’t always been easy, he admits. “We dropped our profit, for maybe seven or eight years we didn’t make money. We had to sell some of our farms. And it was complicated not only because of the agriculture, but also the mentality of the marketing and sales department.”
When the movie Sideways hit theatres in 2004, it delivered another blow. Rodriegurz says up to 70 percent of their 1.3m cases sold to the US were Merlot. Sideways put a huge dent in that.

So organics took on an even greater emphasis, creating a point of difference from other companies. These days Emiliana exports to 60 countries and is one of the largest wineries in Chile. In the past nine years they have seen an increase in volume of 251 percent, and last year produced 850,000 9l cases. They are living proof Rodrieguez says of how looking long term, not short, is so important.

He says the BUT factor is the biggest issue facing the growth of organics world-wide.

He counters the reasons many cite for not moving away from conventional.

Productivity. “For us it is working. The average price for Chile per case of 9l is $28. Emiliana is now reaching $40. For our model it (organics) works.”

Less efficient. “In the short term yes it can be. But in the long term, things like water use, soil fertility, biodiversity, it isn’t.”

It’s a niche product. “It was when we started. In Germany we were in the supermarket – you know when you ask the directions to the toilet? That’s where the organic products were. But not now. Our main export countries want more and more organic products.”

More expensive. “It depends, but we have found that quality sells. Coyam is selling in the US for $29, because it is quality.”

Only for rich people. “Not any more. The demand for organics is growing and growing. As more land becomes organic the products will become cheaper, it will be much cheaper to produce as we will have more tools and technology.”

Large scale is not sustainable. “We are proof that is not the case.”

“There are just too many buts. So when people say why have we gone organic and biodynamic, I just say why not?”