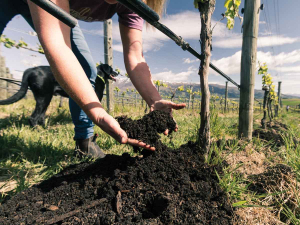 One of the best ways for winegrowers to learn about organic growing is to witness their peers’ experiences. So from 2011 to 2014, Organic Winegrowers New Zealand ran the Organic Focus Vineyard project, with government and industry funding.

We had three participating focus vineyards in different wine regions, and for three years we gave them access to professional advice from a vineyard consultant skilled in organic conversion. In return, each vineyard team opened its site up for the rest of the wine industry to learn from.

At each focus vineyard site, the vineyard was split in half, with only half of each site put into organic production. This made it possible to compare each newly organic vineyard with an adjacent conventionally managed vineyard on the same soils.

The project spanned three growing seasons, from 2011 through 2014 and at the end of the project, all three focus vineyards had attained full organic certification. In the winter of 2019, researchers revisited the soils from the three sites to assess soil health after eight years under organic management, looking at a range of parameters including soil nutrient status, soil structure and soil biology. While a sample size of three vineyards means that results from this monitoring cannot be construed as being representative of all organic vineyards, the results were generally positive for organic production, showing a continuation of general soil health, without any significant problems emerging.

We also talked to the managers about how organic production has continued to unfold for them. Five years after the conclusion of the original project, all three wine companies have either increased or maintained their commitment to organic production. Here are their stories.

Mission Estate’s recent decision to take the rest of the Mere Road vineyard into organic production was animated by a quest for wine quality. The winemaker reported noticing textural differences in the organic grapes and wines over the past three to four years, and hypothesised that this difference could be due to thicker skins on the organic grapes. The conventional vines at Mere Road were more vigorous in growth than the organic vines; however, the Mission team saw this as an advantage for organics. The grapes are thinned at this site regardless of vigour, so less vigour in the organic vines means less thinning to do. It’s likely that the lower vine vigour resulted from using an organic approach to undervine weeding.

The Mission Estate team also believe that the organic grapes at Mere Road have been more resistant to botrytis. Mission Estate winemaker Paul Mooney believes the organic grapes from the Mere Road vineyard to be more suitable for high-end wine production. Although the winery is not certified organic, the wines from this vineyard are made separately, with only organic grapes. This is an interesting example of a winery engaging in organic production not so that they can put a sticker on their bottle, but for the sake of wine quality.

Wither Hills’ Taylor River vineyard produces Sauvignon Blanc and Pinot Noir on stony alluvial soils in Marlborough’s Southern Valleys. The original focus vineyard area continues to be split between organic and conventional production along the same lines that were set up at the start of the focus vineyard project. Wither Hills has elected to continue to manage the blocks separately, and they are now making organic and conventional wines separately as well. The winery recently released its first certified organic Sauvignon Blanc from the focus vineyard. Wither Hills is also looking to expand into making certified organic Chardonnay and Pinot Noir, in response to signals from the market and signs that consumers are seeking out organic products. The team have observed that there may be a bit less disease susceptibility in the organic blocks as skins tend to be thicker, but more research would be needed to confirm this observation.

Gibbston Valley Wines’ School House vineyard produces Pinot Noir and Pinot Gris on light sandy soils in the Bendigo region. The focus vineyard project represented the company’s first foray into organic production. Their commitment to organic winegrowing has steadily increased since that time. Gibbston Valley Wines have kept the organic block from this focus vineyard in organic production. The company have also since proceeded with converting other vineyards to organic growing. Currently 50 percent of their company-owned vineyards are fully certified organic, and they are aiming for 100 percent, with most of the remaining area currently in the organic conversion process. Multiple wines are now certified organic.

The Gibbston Valley Wines team believe that organic growing offers a more faithful and clear expression of each vineyard site. They market their wines as an expression of place, and this commitment has driven their further organic conversions. Winemaker Christopher Keys prefers not to categorise organic wines as objectively ‘better’ or not. In his words: “I believe an organic regime allows a closer revelation of place; be that an easy conversion that shows a well-balanced site, or the revelation of an imbalance. Each year we’re learning about our processes, and believe that the health of a site with organic viticulture is more faithfully portrayed. We feel that there isn’t anything remarkable about organic viticulture. We like it, employ it, and it is a system we like for its clarity – but it isn’t the risky alternative anymore, in our view.”