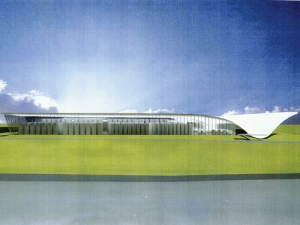 An image of Delegat’s new winery being built in Hawke’s Bay.

The Delegat Group has paid $29.3 million for Hawke’s Bay Dairies’ 838ha farms in Crownthorpe to support its long-term growth strategy.

The purchase is a highly significant development for Hawke’s Bay.  Last year, the region had a total of 4816 hectares in producing vineyard, which would make this new venture by far the largest ever developed in the region.

The new venture is in two blocks, both owned by Hawke’s Bay Dairies.  The main chunk, 487ha, is on the corner of Crownthorpe and Matapiro roads, adjoining an existing Delegat vineyard.  A further 350ha is the farm’s Rauriki support block about five kms away.

The purchase will settle in May next year.  Planting is aimed at lifting production from 2020.

The company is in a five-year phase aimed at increasing production from about two million cases a year to three million in 2019.

In 2013, Delegat’s bought a 61ha vineyard as well as the winery from Matariki Wines and Stony Bay Wines – both had gone into receivership.

Delegat Group already has Hawke’s Bay’s single biggest vineyard with some 290ha in production in the Crownthorpe area, where it grows its Merlot.  Managing director Graeme Lord says the higher altitude subregion, off the Napier-Taihape Road, offers prime grapegrowing conditions.

In full production, the land, previously owned by the Manawatu-based Hopkins Farming Group, has the potential to produce more than 550,000 cases a year.

Delegat’s also has established vineyards in the Gimblett Gravels subregion west of Hastings.  A new winery with capacity to process 10,000 tonnes of grapes a year is under construction on the fringes of the city and it is expected to be ready to handle next year’s vintage.

The newly-acquired Crownthorpe land will be progressively planted from spring 2017.