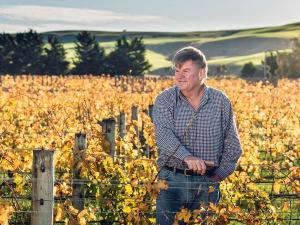 It was one of the first four wineries in what was a fledgling wine region, while Larry's only exposure to Pinot Noir production was during his tenure at Delegat, where he produced it for another winery.

Skip forward 37 years and Larry has forged a reputation as one of this country's top tier Pinot Noir winemaker, and has founded and sold his own winery - The Escarpment - which he left at the end of April.

So, how did a South Australian born and raised on the heady taste of Shiraz find himself in a remote, rural cool climate wine region producing Pinot Noir? The answers lie in his heart; he came to New Zealand in 1980 in pursuit of a Kiwi girlfriend, Sue, who became his wife.

Larry's first job in wine came the same year, when an old school friend and fellow winemaker, John Hancock, offered him a place at Delegat. The two of them attended Roseworthy Agricultural College together - John to study winemaking and Larry to study agriculture, hoping to work in dryland agriculture centred around livestock. Instead, the best opportunity that presented itself was making wine in New Zealand. "I really just came here chasing Sue and thought I'd work here for a vintage then drag her home to Australia. But then I worked that year and stayed. I've never looked back."

In 1985 Larry was drawn to Martinborough Pinot Noir, attracted to the idea of starting something at ground level. "And I've never really been a Cabernet Sauvignon person, so Pinot Noir made a lot of sense to me."

The Martinborough village was pretty barren when he arrived with no restaurants, only two takeaways and two pubs. But the region itself was appealing. It's in the rain shadow of the Remutaka Range, with a climate cooler than South Australia, but with similarly low rainfall and drought, and relatively close to the coast. These factors resonated with Larry when the Milne brothers invited hm to join them in the early days of Martinborough Vineyards.

"The Milne brothers were Derek, a soil scientist with the DSIR, and his youngest brother Duncan, who was a dynamic person and ran the business. Both were very influenced by St Helena and Danny Schuster in Canterbury, and I would credit Derek as the one who recognied that the Martinborough district could be good for Pinot Noir."

There was also very little wine made in New Zealand from Vitis vinifera grape varieties at the time, so it was exciting to be able to produce purely vinifera wines. The grapes planted in the early days of Martinborough Vineyards included Pinot Noir, Chardonnay, Sauvignon Blanc, Gewürztraminer and Riesling, but Pinot was deemed to be the most promiing from the start. "We wanted Pinot Noir to be our hero, so it got every priority and it was very successful right off the bat. The other one that was really exciting to me was the Gewürztraminer; it was very powerfully flavoured, as was the Chardonnay... I could never get my head around Sauvignon, so we were never really very successful with it."

The turning point for Larry's personal winemaking approach to Pinot Noir came in 1990 after a trip to France, where he worked vintage for such luminaries as Domaine Dujac, D'Larlot and Aubert Villain's property in Buzeron. "The other thing that helped was Gary Farr (a fellow Australian winemaker) was at Dujac at the same time so we got to do the vintage together and we've been very good friends ever since."

When he returned home, Larry started using whole bunch fermentation, extended fermentations and pre-ferment maceration as tools in his appraoch to Pinot Noir. He also went to Oregon for a Pinot Noir Workshop and celebration; a visit that created a pivotal change in his thinking.

Wild yeast fermentations, whole bunch ferments and time in tank were the key attributes that gave his wines their early stylistic point of difference. "A lot of people said that the use of whole bunch created wines that were too herbal, too green and too tannic, and we learnt how to handle its use more delicately. The flavours from whole bunch are controversial. It's a bit of a dichotomy. You're either in or you're out. We're always in at 50% or more to express its character."

Larry left Martinborough Vineyards in 1999 and began planting grapes nine kilometres west of the village in the windswept, dramatically beautiful Te Muna valley. The soil types are the same as in and around Martinborough village, but Te Muna is geographically distinct with higher winds and cooler nights - extremely advantageous to the growing number of wineries and vineyards there. These include Big Sky,  Butterworth, Craggy Range, Equilibrium and Te Hera, as well as other smaller producers such as Te Muna Valley Wines, owned by Colin Caruthers QC and journalist Deborah Coddington.

When Larry and Sue founded The Escarpment Vineyard with an Australian-based couple, the aim was to continue what Larry had learnt at Martinborough Vineyards. He wanted to delve into high density plantings and expand on what he'd seen in Burgundy. When his marriage dissolved and the other partners needed their money back, The Escarpment Vineyard was sold to South Australian winery Torbeck in 2019. Since then, he has remained as General Manager, overseeing the construction of a large new winery building.

Leaving now, after more than two decades with the winery, Larry will have a break in Australia before he resumes a new role looking after a small vineyard south of Martinborough village. He may have retired from The Escarpment but not, he insists, from wine.

Wine: I always say it needs to be two wines - a Chardonnay and a Pinot Noir. Perfect balance. Easy to say Burgundy but the best of New Zealand is very close these days.

Meal: Any seafood or game meat. Duck certainly is my favourite - either Peking duck from the Flower Drum, Melbourne or my own Wairarapa wild duck (or crayfish) risotto.

Album: Two artists from my youth that keep showing up on the play list; guess they are very formative years. Sid Rumpo, First Offence, and Little Feat, particularly Sailing Shoes but all their albums are great.

Book or Magazine: Of course, always difficult to answer but if I can cite an author rather than a book I totally enjoy Derek Hansen, particularly the four books in the "Lunch with" series.