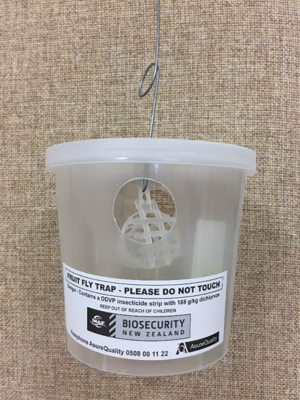 Not long after a few BMSB post-border detections were dealt with, another familiar biosecurity threat has raised its head.

A Queensland fruit fly (Bactrocera tryoni) was found in a Biosecurity New Zealand surveillance trap in Devonport on 14th February 2019, and the initial detection was followed by several more in short succession.

Should we be worried about fruit flies?

Some species of fruit fly, including the two found in Auckland, have the potential to threaten New Zealand’s fruit and vegetable export industry, currently worth about $3.6 billion a year. Fruit flies lay their eggs inside the skin of fruit as it ripens. These eggs hatch into larvae inside the fruit, and the larvae feed on the fruit making it inedible. An established population of fruit fly in New Zealand could mean many countries won’t buy our produce.

As the wine industry produces a processed, bottled product, fruit flies present less of a risk. Grapes are a fruit fly host plant, but larvae can’t survive the fermentation process and don’t have any significant impact on the flavour profile of wine. Fruit flies do feature on the New Zealand Winegrowers list of Most Unwanted pests, but this is primarily because of the restrictions put in place when they are detected.

When a fruit fly is found in a surveillance trap, a biosecurity response is triggered. Biosecurity New Zealand declare a response and set a legal Controlled Area in place around the site of the detection. This Controlled Area made up of two Zones, A and B. Zone A is the highest-risk area within 200m of the detection site, while Zone B is the area within 1.5km. Many extra fruit fly traps are set within the Controlled Area, and special bins are out for residents in the area to dispose of fruit and vegetable waste. No fruit or vegetables can be taken out of the Controlled Area. Samples are taken from fruit trees in backyards and checked in a mobile lab. Compost is inspected. Pamphlets are dropped to all residents and biosecurity officials approach risk businesses – those selling or handling fruit and vegetable products – to let them know about the restrictions. Schools and community groups operating in the area are informed, and biosecurity officials attend local markets and events to reinforce to the public the importance of abiding by the restrictions.

In the recent cases in Auckland, there were no vineyards within the Controlled Areas and therefore no impact on the New Zealand wine industry. However, if there was a fruit fly detection in a wine-production area this could make it very difficult to move grapes out of the vineyard at harvest and may result in significant loss to those affected – hence the inclusion of fruit fly on the list of the industry’s Most Unwanted pests.

If no breeding population is found, a level one response will likely last for 14 days from the last detection. After this, the Controlled Area will be disestablished, and movement restrictions lifted. Extra traps may remain in place at the discretion of Biosecurity New Zealand. Should a breeding population (or several more flies) be found, the response will increase. This involves spraying host trees in the Controlled Area with bait laced with fipronil, a broad-spectrum insecticide which will kill female fruit flies (as they aren’t attracted to the traps). Fruit from trees sprayed with fipronil is unsafe for consumption.

Biosecurity New Zealand works with industry partners on the Fruit Fly Council to decide on the level of response and actions taken. The Fruit Fly council is made up of representatives from those industries party to the Fruit Fly Operational Agreement (OA), established under GIA. New Zealand Winegrowers is not a signatory to the Fruit Fly OA, but we do monitor any detections closely and put out updates and advice for members in affected areas.

How do the surveillance traps work?

The national Fruit Fly surveillance programme is managed by AsureQuality for Biosecurity New Zealand. Thousands of traps are set up in grid networks in high risk areas across the country, with fruit fly host plants used as trap sites. The traps used are called Lynfield traps and are essentially small plastic buckets with holes in the sides. A pheromone lure and sticky insecticide strip are hung inside the bucket. If male fruit flies are present in the area, they are attracted to the pheromone and enter the trap. They stick to the strip and are killed by the insecticide. When the trap is checked, the specimen will be collected and sent for identification at MPI’s lab. Because a pheromone lure is used, the traps will only catch male fruit flies. A breeding population is confirmed by finding larvae in infested fruit or sighting of female flies on host material.

Fruit flies have been detected in New Zealand before, including in 2015 when a breeding population was found in Grey Lynn, Auckland. This population was eradicated, and New Zealand Winegrowers is confident that the response activities will result in successful eradication should this occur again.

If you think you have seen an adult fruit fly, fruit fly larvae, or anything else unusual, don’t forget to Catch It, Snap It and Report It to the Biosecurity New Zealand hotline on 0800 80 99 66, and get in touch with the NZW Biosecurity team (This email address is being protected from spambots. You need JavaScript enabled to view it.).

The Ministry of Primary Industries (MPI) says controls of movement of fruits and vegetables in Auckland’s Northcote suburb may remain in place throughout winter.

Two more male Queensland fruit fly have been found in Northcote, bringing the total to six.

A second Queensland fruit fly has been discovered on Auckland’s North Shore.

Another fruit fly discovery in Auckland

A second type of fruit fly has been found in a surveillance trap in the Auckland suburb of Otara.