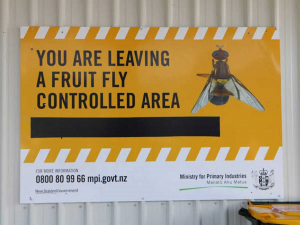 Signs like these in Northcote will now come down.

The move signals the end of an almost year-long operation, including a massive effort by the community, triggered by the discovery of a Queensland fruit fly in a surveillance trap in the area last February. The operation cost Biosecurity NZ and Horticulture NZ $18 million.

“While this is great news, we remind people in the area to still stay vigilant for signs of the fruit fly,” says Biosecurity New Zealand spokesperson Cath Duthie.

“It’s now been six months since a fly was last trapped in the area, and this, along with an intensive baiting programme throughout the spring and the inspection of hundreds of kilos of fruit without a find, has given us confidence there is currently no breeding population of the Queensland fruit fly in Northcote.

“We can once again declare that New Zealand is free of the Queensland fruit fly,” Duthie says.

Biosecurity Minister Damien O’Connor says getting to this point wouldn’t have been possible without the support of the North Shore community.

“This has been a really long haul for this community and I’d personally like to pass on a big thanks to each and every North Shore resident. The 11 months of movement controls were a big disruption for you all, but necessary to contain any potential population of this insect pest which, if it established here, would significantly damage New Zealand’s horticulture industry and home gardens.”

The Controlled Area is now lifted and there are no longer restrictions on moving fruit, vegetables and green waste. The biosecurity wheelie bins that have dotted the neighbourhood will now be removed and road signs will be dismantled.

Response at a glance:

• Since February 2019, there were 10 separate findings of solitary Queensland fruit flies through surveillance trapping in the Northcote area.

• There are over 4600 traps set in the greater Auckland area to find three different types of fruit flies. These remain in place and are part of a national fruit fly surveillance programme with over 7800 traps nationwide.

• While the 10 adult male flies were found (the pheromone traps attract males), no evidence of larvae, pupae, eggs or female flies was found.

• Approximately 160 people in the field and in Wellington were involved at any given time.

• Altogether, some 800 individual people were involved in the programme.

• 5766 properties were in the Controlled Area and subject to movement controls on fresh produce and garden waste.

• 5 tonnes of fruit was collected from the area and inspected for fruit fly larvae over the response.

• Approximately 145 tonnes of produce was collected and disposed of throughout the operation.