Connecting people and place at Rippon 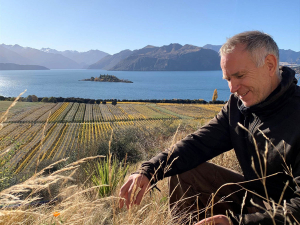 As winter draws Rippon to its "lowest ebb", its community gathers for Matariki, in celebration of nature's new year.

Staff gather in the same hall, literally surrounded by the soil of Rippon, and voice all those aspirations, ideas and values to the land and to each other, says Nick, winner of the Leadership category of this year's Gourmet Wine Traveller New Zealand Winemaker of the Year Awards. "It is basically building a culture that in turn maintains a relationship with that singular piece of land."

The innovative bill that gave the Whanganui River the legal rights of "personhood" in 2017 exemplifies the philosophy at Rippon, says Nick, who regards the land as an individual, with al the rights that entails.

At the vineyard's Farm Voices conference in spring, staff lie in a paddock "and listen to Rippon", with a focus on one of the earth's elements each year. Last spring was "air", and the conference included staff working with a music teacher to sing in harmony in the hall. Not necessarily in their comfort zone, "certainly not in mine", says Nick, but extraordinary, nonetheless. Then there's the harvest party in autumn, at the end of the winegrowing cycle, in a celebration of fertility and passion, when staff throw compost out on the soil to call in the year ahead.

The rituals are daily too, and on winter mornings Rippon workers warm themselves around a brazier, shaking hands and connecting. They might talk about what they have to do, or just shuffle feet and say nothing, and "sometimes there is a snippet of wisdom someone brings along; something special might appear out of an otherwise pretty mundane act", says Nick. "I guess that's a time to look each other in the eye and know what we're dealing with... It is that understanding that we are all working towards a higher goal."

In summer the morning greeting will be followed by 60 or 90 minutes of hand hoeing, "which is taking that collective energy and connecting with the land", Nick says. "I think it's really valuable for people to sweat a little bit and use their backs and stick their hands in the dirt every day."

The integral connection of people to place echoes the tūrangawaewae of Māori culture, and the notions of terroir Nick grew up with in France, informed by Cistercian and Benedictine traditions.

And it echoes the experiences of people on Wānaka Station more than a century ago, established by the current generation's great grandfather Percy Sargood in 1912. It was extremely isolated, with no access to diesel, and 80% of the arable land was farmed to feed the horses required to work it. "That's pretty self-sustaining," says Nick. There were orchards and gardens to feed the community, with a bread oven in the middle, where staff would come together to eat. These days Nick, and the wider family behind the estate, work to nurture a contained symbiosis of community, culture and terroir.

At this month's Matariki celebration, new staff here for the pruning season will experience the perfect induction to Rippon's ways, with a roaring fire, lots of stories, poetry, "perhaps even the odd song", says Nick. "If you set up the space and opportunity for something special to happen, there's a high probability that it will. I think that's probably how we roll in all our work."

Making their marc on soil health

When Rapaura Springs bought a vineyard in an arid and windswept pocket of Marlborough's Blind River, building soil health became their focus.

Managing the land and vines with a century-long outlook is business as usual at Paritua, says Winemaker Jason Stent.

Viticulturist Richard Hunter stepped outside the box and into the blocks when transforming Avon Valley sheep paddocks into productive Sauvignon Blanc crops.