New Zealand venison a hit in the Netherlands 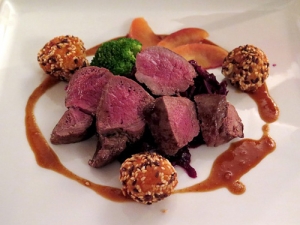 Deer Industry New Zealand says the northern summer trial promotion of Cervena venison in the Netherlands went down well with chefs and their customers.

"For the first time, our venison was sold as a spring-summer grilling item to 1200 Dutch restaurants. It was clearly branded as mild-flavoured farmed Cervena venison from New Zealand to differentiate it from wild game which normally only appears on menus in late autumn and winter," says DINZ Passion2Profit manager Innes Moffat.

During the trial, First Light Foods sold 15,000 kg of Cervena at normal chilled venison prices – just above the level of prime European beef. This is much more than the normal price of venison in Europe in the northern summer, where imports are normally frozen and held for sale in the game season.

The trial began in March and ended in September. One distributor, Hanos, led the trial from the Dutch side, and the five Cervena exporters and DINZ are sharing the feedback.

If the trial is continued in 2016 as expected, it will be expanded to involve other NZ venison exporters and their importers and distributors in Netherlands and Belgium.

"DINZ and exporters are trying to grow year-round demand for our venison at chilled prices in new markets and new segments of existing markets," says Moffat.

The promotion is part of the Passion2Profit strategy, a Primary Growth Partnership programme between DINZ and the MPI.

"In the Netherlands, we are aiming to create a new segment outside their game season. So we need to position Cervena as a novel product. To reinforce this and to maximise value from the whole animal, five new cuts were trialled this year. Three of these struck a real chord – shoulder tenders, spare ribs and tri-tips." (Tri-tips are the caps of the rump.)

There have been many lessons from the trial.

"Where chefs made a feature of Cervena, it sold well and the feedback from diners was overwhelmingly positive. Where it was sold with game meat associations it didn't sell well," says Moffat.

The greatest success was in restaurants selling Cervena as part of a fixed menu. Diners tried it, liked the experience and the feedback was very positive.

"One of our biggest successes was demonstrating that we can get Cervena venison, out-of-season, into chefs' heads and that they will buy it. The chefs who backed Cervena came back with repeat orders ... with some selling more than 150 kg over the summer. Their feedback on quality was unanimously positive."

Concurrently with the Hanos promotion, Silver Fern Farms' Dutch importer and distributor promoted Cervena to its chef network with co-funding from DINZ. The results from this trial, which was also well received, will be supplied to the five participating exporters for analysis.

The five venison marketing companies will now analyse the sales data and reports from chefs to determine how an expanded promotion in 2016 will assist the industry sell more chilled venison at premium prices year-round in Europe.