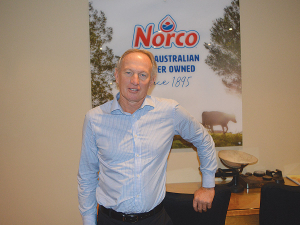 Norco is one of the top 10 dairy processors in Australia, the only co-op remaining since the once-mighty Murray Goulburn Co-op was bought by Canadian company Saputo 18 months ago.

Norco chairman Greg McNamara says there is a growing interest among Australian dairy farmers to supply a co-op.

“We have a daily enquiry list; we haven’t moved supply beyond our traditional supply pool between Gympie in Queensland and north of Sydney,” he told Rural News.

“But at some point, if we choose to we certainly can have a farmer listing from southern NSW, Victoria and Tasmania. Yes, we’re even getting calls from Tasmania and South Australia.”

McNamara says Norco is looking at expanding its footprint at the appropriate time; adding value is priority, not growing just for the sake of it.

“Our philosophy is we are here to serve the interest of dairy farmer members and the rest of the stakeholders -- the community and our employees.”

McNamara says some Australian farmers were unhappy to see their co-op bought by global giants and want to continue supply a co-op like Norco. Others are after a sense of community.

“That’s the level of accountability a co-op brings; there are no ivory towers, we aren’t locked in a room where you can’t get to us.

“In regional communities, you come across one of your managers, directors or the chief executive and there’s a level of personal connection.”

Australia’s dairy industry was rocked in 2016 when Murray Goulburn, the largest dairy co-op in the country, was forced to retreat on its milk price offer to farmer shareholders.

After months of promising to raise the farmgate milk price, Murray Goulburn suddenly and retrospectively slashed milk prices, stunning its suppliers and leaving many of them hundreds of thousands of dollars in debt.

McNamara says farmers have seen what’s transpired in the dairy industry over the years; they like what they see in Norco.

The co-op is focused on a competitive milk price, paying about A59c/L for milk (equating to about A$8/kgMS) this year.

“To be competitive on milk price we run the business on a commercial basis,” McNamara says.

Another reason Norco still exists is its farmer voting structure: every farm has the same number of votes irrespective of milk production.

It operates two fresh milk plants and an ice cream factory, making it one of Australia’s biggest ice cream manufacturers.

Norco produces ice cream for third parties; products are sold in Australia, China, Japan and the US.

Some of its ice cream produced for supermarket giant Woolworths ends up in Countdown stores throughout New Zealand.