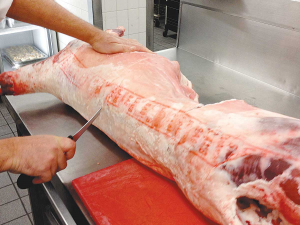 As during the first lockdown, Auckland-based butchers and green grocers are not allowed to operate in the same way as supermarkets and dairies during the current Covid restrictions in this region. However, lawyer Andy Glenie argues that , legally, this could be achieved reasonably easily.

Industry groups have been lobbying for independent greengrocers, butchers and bakers to be allowed to operate under COVID-19 Alert Level 3.

OPINION: Between 28 April 2020 and 14 May 2020, New Zealand was at Alert Level 3. Supermarkets and dairies operated with relative freedom. Independent food retailers, on the other hand, were told they couldn’t allow customers into their premises. Large quantities of meat, fruit and vegetables struggled to find their way to market.

In a nasty case of déjà vu, Auckland was put back at Alert Level 3 on 12 August 2020. Supermarkets and dairies were again treated as “Category B businesses”, meaning that they could trade with some restrictions (e.g. the 2-metre rule applied inside their premises).

All other food retailers were treated as “Category C businesses”. They could trade on a contactless basis, but once again could not allow customers into their premises.

Many have understandably called for independent food retailers to be allowed to operate in the same way as supermarkets and dairies at Alert Level 3. Legally, that could be achieved easily.

The rules for the Auckland lockdown were set out in an Order issued by the Minister of Health, Chris Hipkins. That Order was issued under the COVID-19 Public Health Response Act 2020. The Act requires the Minister to keep such an Order “under review” and allows him to amend or extend or revoke it at any time. To change the settings for the Auckland lockdown all he needed to do was issue an amended Order, adding some or all independent food retailers to the list of “Category B businesses”.

Going forward, the Minister could draft any future Orders to include independent food retailers as “Category B businesses”.  If necessary, tailored restrictions could be applied.  There is no rule in the legislation itself which prevents the Minister from taking that more flexible approach.

That all depends on political will, which may be lacking. The Government of course holds the steering-wheel at times of national crisis like this.  But it still needs to drive between the white lines. Especially with Parliament now limping towards a delayed dissolution, the courts have an important role to play in ensuring that public decision-makers play by the rules.

The main mechanism used is a special type of court proceeding known as judicial review. Industry groups often use this tool to force scrutiny of important ministerial decisions. Here, the High Court could be asked to examine the relevant Order and determine whether it complies with the law. If it doesn’t, elements of the Order could be quashed. A few key questions would arise:

Did the Minister make the Order in accordance with the Act? As well as making sure that the Order prevented the spread of COVID-19, he must consider relevant social and economic and other factors. He must ensure that the Order was proportionate (meaning that he isn’t using a sledge-hammer to crack a nut), and economically sustainable. He also needs to make sure it is consistent (meaning that like cases are being treated alike). Each of those points would support an argument that the Minister has to give careful attention to the economic impact of the lockdown on independent food retailers. The Court would determine whether the Minister did so by reviewing the papers which record the advice he was given, and the decision he made before issuing the Order.

Does the Order impose an unjustified limit on one of the rights and freedoms protected in the New Zealand Bill of Rights Act 1990? The Minister is explicitly obliged to consider this issue before making the Order. Several key rights could be at play here – for instance, preventing customers from accessing independent retailers could be said to limit New Zealanders’ freedom of movement.

All going well, Auckland will emerge from the current lockdown shortly. But as the last few days have shown, a resurgence can come out of nowhere.

And importantly for the independent industry, the Government has now twice opted to shut greengrocers and butchers down at Alert Level 3. It may be that some thought should be given to whether the legality of the Order should be challenged, to reduce the likelihood of that occurring again next time the virus rears its head.