New Triton will shake things up 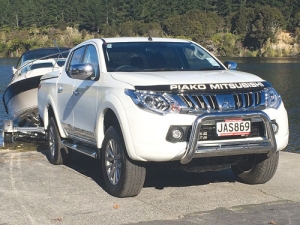 As a dedicated SUV driver who likes the elevated seating position to do a little ‘over the hedge’ farming, the thought of picking up a loan Mitsubishi Triton from dealer Piako Motors, Morrinsville, and the prospect of a bone-shaking ride had left me with a lukewarm feeling.

But imagine halfway home and into a shower of rain, as if by magic the wipers automatically came on. Rain-sensing wipers on a ute? The all new Mitsubishi Triton has a lot of new goodies to catch the eye of the one-in-five new vehicle buyers who will buy a ute in 2015 – that’s if 2014 was anything to go by.

They say first impressions count and the new look Triton certainly has a more substantial presence than the previous model. The latter gave an impression that the wellside designer had been from a different company than the main vehicle designer, and that it had been dropped onto the chassis as an afterthought. The new vehicle has a strong seamless look through the flanks, and the frontal aspect is quite striking – a deep front valance, chrome aplenty and headlights that blend into the hood and wheel arches nicely.

Powered by an all-new, all-alloy 4-cyl engine sweeping 2.4L, the output tops 135kW and offers torque of 437Nm, vs a max of 133Kw/407Nm in the previous version. The torque figure puts the vehicle in a number one position for torque-to-weight output due to its lighter kerb weight than the competition. And though power is up, fuel consumption is down by around 20% to 7.0-7.6L/100 km.

Transmission choice is either 6-speed manual or 5-speed auto, and for more sporty drivers the range topping GLS has paddle gearshift behind the steering wheel.

To keep things moving along all models feature on-the-fly selection of 2WD or 4WD up to 100km/h, diff lock selection and even a centre locking diff on the GLS. In addition the GLS is configured to run in 4WD on tarmac for safety or during inclement weather. Safety plays a big part too, with the inclusion of active traction control, active stability control and trailer stability assist, which lessens the likelihood of jackknife once a trailer starts swaying.

The interior of the Triton has many touches which are car-like, although a working theme is maintained with the use of black plastic for durability. Model-specific options such as key-less entry, Bluetooth connection, USB plugs, dual zone air conditioning and reversing cameras are available.

Seating is almost car-like: bucket style seats with good side bolsters which encourage progress in rough going, and the rear seat passengers have more legroom and space for the feet under the front seats.

The only note from this (taller) driver was the seat squab was a little short and could not be raked back beyond horizontal to push the backside down into the seat.

As part of the test a 1.5 tonne trailer boat package was towed around a rural circuit, but it made little difference to performance and allowed a ‘slightly illegal’ towing speed of 100km/h at a comfortable 1950rpm. The engine was smooth and quiet, and only exhibited a little ‘diesel rattle’ when the transmission was kicked down to encourage get-up-and-go. Ride quality was nearly there compared to large car or a SUV, the only negative being some longitudinal bounce when hitting a lateral bump or ridge in the country roads driven.

At the working end of the vehicle, the wellside has around 10% more space, with less intrusion from the wheel arches, and will swallow a euro pallet easily. At the towbar the capacity is 3100kg, a little less than its competitors, but the lighter kerb weight of the Triton will result in similar or better payloads.

The vehicle tested had an optional load liner, hard lid and bull bar, and came at a Fieldays special price of $46,990 plus on road costs.

Mitsubishi last year sold around 1250 utes and sees this doubling for the 2015 season. With an industry-leading warranty of 10 years,  near car-like interior and ride and, of course, those rain-sensing wipers, it warrants a closer look.