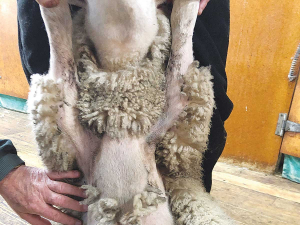 In January, around 40% of the Wiltshire-cross lambs were showing early signs of part shedding on the belly and neck region.

Coarse wool sheep farmers are struggling with the cost of shearing in relation to the value of the wool clip.

Recent sale premiums of up to 15 cents per kg liveweight for shorn lambs over woolly lambs, further illustrates this anomaly.  Many sheep farmers are considering if changing to a self-shedding flock, such as a Wiltshire, is a better way forward.

However, the cost of purchasing purebred Wiltshire’s and the limited numbers available means this is not a viable option.  Although there are examples of farmers successfully changing to Wiltshires, by continual crossing, there is a general lack of accurate recorded information on the costs and benefits from doing so.

Massey University’s sheep team, led by Professor Steve Morris, has begun a long-term study to address this lack of information.   The project has two aspects. Firstly, to model the profitability of such a change and, secondly, to undertake a multi-year flock study recording production and performance as a flock is graded up from a Romney to Wiltshire flock.

Modelling has indicated that, in the long-term, a change to a self-shedding flock will be profitable. However, the model is limited by lack of objective data in regard to production data over the transition period.

Some of assumptions were based on anecdotal industry data, or trial data from more than 20 years ago.  The modelling suggests that the coarse wool greasy price would have to exceed $4.15/kg to break even on the costs of shearing in many farming scenarios.

The project started in March 2020, with 400 Romney ewes bred to Wiltshire rams and a comparable group of ewes bred to Romney rams. The project is being undertaken at Massey University’s Riverside farm 10km north of Masterton.

Lamb losses recorded from birth (including born dead) to docking were 12% in the Wiltshire cross and 14% in the Romney bred lambs The Wiltshire cross ewe lambs were given a shedding score on a scale of 1 (no shedding) to 5 (fully shed) at weaning on 26 November and fewer than 2% showed any signs of shedding around the neck region.

Growth of the Wiltshire cross ewe lambs from weaning on 26 November to 21 January was 155 g/day to reach a liveweight of 36.6kg and are on target for mating liveweights of 45kg in late April. The comparable group of Romneys weighed 35.7kg.

Ewe lambs from this first breeding will be bred to Wiltshire rams in late April 2021 to generate three quarter (F2) Wiltshire lambs in August 2021. The trial then continues with 7/8s or F3 Wiltshire lambs born in 2022 and 15/16s (F4) born in 2023. At each lambing these lambs will be compared to the base Romney flock at Riverside farm.

An open field day is planned for mid May 2021. The project team would be interested to hear from farmers who have Wiltshire sheep on their farms.

This trial is funded by the L. A. Alexander Trust and the Massey University Foundation