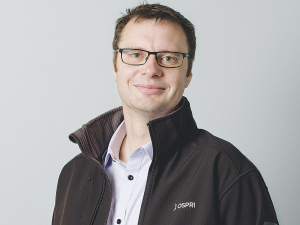 Dan Schmidt's family came to New Zealand in 1896 and settled in Southland where they established a sheep farm.

However, 125 years later, while the Schmidt's are still in Woodlands, just east of Invercargill, the sheep are gone and have now been replaced by dairy cows. In 2020, the family converted their sheep farm to a dairy farm and in 2007, a second farm was converted.

Dan's father did the first conversion and then when they got the second farm at Wakapatu, near Riverton, he helped get the farm back on track after some issues during the conversion phase.

"It was a lot of work to do the conversion phase, setting the farm up for a different type of farming," he explains.

However, Schmidt says the thing about dairy farming is once the farm is set up, there's an element of routine and he's not great at routine.

"Getting up at 4am, 9-10 months a year is not for everyone," he adds. "Also, my wife is a townie and didn't want to go back down to Southland to work on the farm, so I made a choice. That's not to say I won't go back to farming again one day."

In the meanwhile, Schmidt's latest challenge is at Ospri, helping farmers eradicate bovine tuberculosis (TB) from their herds in the North Island. Just six months into his new role as general manager service delivery, North Island, Schmidt says he likes working for organisations where you're helping the primary sector progress.

After completing a Bachelor of Commerce at Otago University and an overseas working holiday in the UK, Schmidt got a job at DairyNZ and then with Ministry of Primary Industries (MPI) on the Mycoplasma bovis programme. He says the principles behind disease control in the M. bovis programme are quite similar to that of bovine TB - 'find, contain, control' but adds that some aspects of the work are quite different.

"For example, the M. bovis rules for compensation are quite different from the TB compensation, so that changes the support we can put around the farmers as well."

Schmidt says the other area that is different with the bovine TB eradication programme is the aspect of vector control, otherwise known as possum/pest control.

"It's a major challenge that we just don't have with the M. bovis programme," he explains.

"1080 is the best available option to help rid the country of possums and other pests and this is what we use for aerial operations. There are large areas to cover with steep, and difficult to access terrain. There is no other viable alternative."

Schmidt says that in order to do aerial operations, OSPRI must get consent through consultation with landowners.

"Sometimes those can be individual private landowners, forestry blocks, Department of Conservation land or iwi trust land, where there can be thousands of beneficial land owners," he explains.

"We work hard to gain consent from landowners and generally they understand the importance of what we are doing. We've gone down from 1,700 herds infected to approximately 30. Although we're making good progress, there is still some way to go and we won't stop until the job is done."

Schmidt says the team he works with are passionate about their work and have great enthusiasm for eradicating TB.

"TB is a devastating disease and we see firsthand the impact it has on animals, farmers and their families and rural communities. Our team often must have really difficult conversations with farmers and landowners, and we are under no illusions about the size of the task ahead."

Schmidt says they work closely with the OSPRI shareholders, Beef + Lamb NZ, DairyNZ, and Deer Industry NZ, plus other stakeholders to ensure they can meet their needs and expectations.

"Ospri is on track for livestock being free of TB by 2026, but we're always looking at using science and technology and strengthening our community engagement and consultation efforts to support us to reach that goal."