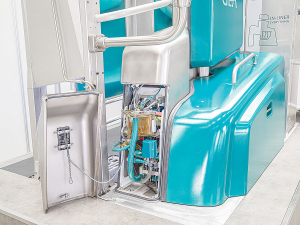 A new generation of milking robots is promising greater profitability for farmers.

"All in all, dairy farms benefit from increased availability, more milkings and milk per day, and reduced operating costs of up to 35% compared to the predecessor model, for greater profitability," says GEA.

The company says its In-Liner Everything technology performs every step of the milking process - stimulation, cleaning/pre-dipping, pre-milking, milking and dipping - in just one single procedure.

"The dipping agent in the In-Liner Everything process is applied to both in the teat cup and teat, which means the teat rubber surface is also wetted," it explains.

"As a result, the dipping agent disinfects the teat skin as well as the teat cup.

“This can eliminate the need for intermediate disinfection with peracetic acid… the camera and teat cup are now cleaned in parallel.”

GEA says these process improvements not only shorten the box time for more milkings per day, but also protect the environment and reduce operating costs.

Meanwhile, it claims the new software package brings another important innovation to the Dairy-Robot R9500: with just one click in the MView control, a convenient separation mode is activated.

This allows cows whose milk is being separated to be milked as a group without intermediate rinsing or cleaning after each individual cow.

“This saves time and significantly reduces water, detergent and energy consumption. It also means that milking systems are ready for use again more quickly for the following cows.”

GEA says its milking technology modules have also been improved.

“With the milking technology modules, which contain the sensors for milk analysis and metering.

Up to four milking robots can be connected to the supply unit of the DairyRobot R9500. The company says this not only enhances the energy efficiency of the operation, but also provides sufficient flexibility for future expansion.

GEA says optional empty space modules have been developed for the DairyProQ milking carousel, which can be used to reduce investment costs and increase throughput capacity by retrofitting additional milking shed modules.