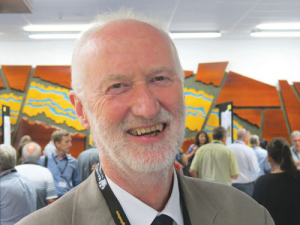 ‘Accurate farming' would be more apt than ‘precision farming’ to describe this agricultural practice, says professor Simon Blackmore of Harper Adams University in the UK.

Blackmore, head of engineering at this agricultural university in the West Midlands, was a keynote speaker at the recent Fertiliser and Lime Research Centre annual workshop at Massey University.

He says the term ‘precision agriculture’ is a misnomer because it doesn’t convey exactly what is happening. It is a systems approach that uses technologies to create new opportunities.

Many technologies used in agriculture, such as GPS, drones and auto steer, were developed outside the sector but are now used to help make crop production systems more efficient, Blackmore says.

“We have a lot of agricultural inputs which we literally throw over the land: chemicals, sprays, fertilisers -- we throw them all over the place and how much goes on target? A very, very small amount and the rest all gets leached out into the water and creates problems somewhere else. It’s a crazy situation because farmers are buying this stuff and it’s going off target and creating a problem for someone else.”

Blackmore reckons his role is to give farmers new tools to allow them to become a lot more accurate with their farming systems. To this end, he says, they are developing a concept called ‘intelligently targeted inputs’.

The goal is to move to ‘sustainable intensification’ for crops– but not livestock – getting higher crop yields, but reducing harmful inputs which could damage the environment.

A world challenge is producing enough food for the growing population. But while many people have talked up the notion that large company/family corporate farms will hold the key to this, Blackmore thinks otherwise. He says traditionally, precision farming has been the preserve of larger farms able to achieve economies of scale by getting the maximum value out of a GPS or a large tractor.

“The big tractors can’t be made any bigger now, but the new opportunity coming is the application of intelligently targeted inputs with small machines doing exactly the right things on a smaller scale,” he explains. “The extra production is going to come from family farms and small fields because the larger farms can no longer get levels of efficiency by economies of scale.

“We are now talking about small robots that are reasonably priced and which can operate in small fields. This will allow farmers to grow higher value crops in these small fields and improve yields and make smaller farms more viable.”

Blackmore says the use of lightweight robots in agriculture will also improve soil structure and quality. He believes the present system is “crazy” because the heavy tractors used to plant and tend crops compact the soil and soon afterwards another tractor is used to open up the soil and repair the damage caused by the first tractor.

He says the best soil is usually found in forests where bugs and insects are left alone and the soil is not damaged by machines.

The final piece of the puzzle is getting farmers to adopt new technologies and systems. The key driver, Blackmore believes, is farmers being convinced of the resulting financial benefits.