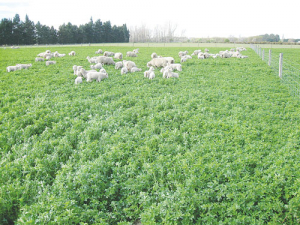 Interest in lucerne – particularly in summer dry areas – is growing.

Long-time lucerne expert and advocate Professor Derrick Moot of Lincoln University says he’s now getting interest in his work from around the world.

He told Rural News, at the recent Grasslands Association conference in Whanganui, of his work in Victoria and South America.

He says a lot of the interest in legumes, such as lucerne, is from farmers looking for ways to cope with summer dry periods and because of environmental concerns about the use of nitrogen fertilisers.

“I have made several visits to Australia, especially Victoria, looking at the grazing management of lucerne and how they can do this better. There has also been some interest from South America, but not North America where they tend to cut and carry lucerne and it’s used in mixed feeds to put into the dairy ration,” he explained.

“The Europeans don’t tend to be there yet, due to their types of agriculture being different from what we are used too. Their tentative inquiries relate more to getting legumes into their system and reducing nitrogen fertiliser.”

Moot says he’s had some interest from France where there are drier and hotter areas and where lucerne may work.

NZ farmers in the traditional areas – Otago, Marlborough and North Canterbury – are interested, as are farmers in Hawkes Bay and some western areas of the North Island where soils are sandy and silty. In the past people haven’t considered growing lucerne in these areas, he says.

“The inquiries are now broader than when I started. So traditionally it was a sheep and beef systems thing,” he told the conference. “But I now have people who are milking goats and sheep and recognising that traditional ryegrass white clover pasture is not giving them the level of milk production they require, so they are looking for alternative forages and are embracing lucerne or chicory or red clover in pastures.”

Moot says farmers experiencing summer dry are looking for high quality forage. “So if we can get legumes into a system they can increase either milk production or liveweight gain of animals, and mitigate the effects of summer dry.”

He says farmers have access to lots of information via publications such as Rural News, or via newsletters and field days. While field days work for some, they don’t for others: some farmers are extrovert and others introvert – the two getting their information in different ways.

Moot says 20 years ago he foresaw climate change, hence his looking at and later promoting lucerne. Milder winters and droughts are signs the climate is changing; the big issue for farmers is to adapt to these changes.

“I think our farmers have always been reasonably early adopters of science, but you have to prove something to them,” he added. “It’s their business and you find that successful people will be fast followers. It’s the science and agribusiness communities’ job to find these early adopters and highlight them so that we get fast followers.”