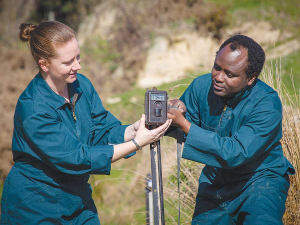 Remote sensing cameras and GPS are being used by Massey University researchers to see what, if any, damage sheep cause to waterways in the hill country.

A project led by Dr Rene Corner-Thomas, with help from PhD student Aloyce Bunyaga, is trying to get hard data on how sheep use and interact with water on hill country farms. The trial work is being done on Massey’s Tuapaka research farm, near Palmerston North.

Here 40 ewes have been fitted with GPS tracking devices and 14 video cameras have been placed at intervals along a 230m stretch of a stream on the property.

The cameras are triggered or activated by animal movement. The trial has run for two weeks and has produced a massive amount of data which now has to be analysed.

Corner-Thomas says sheep until recently had been completely ignored in the conversation about the impacts of livestock on waterways. She says they have observed while working with sheep for many years that they are not keen on getting their feet wet.

“They don’t seem to spend time standing in water, so our theory is that sheep only need water when there’s good reason to go to the waterway, ie to drink or to graze the areas beside the waterways where the grass is lush,” she told Rural News.

“We know that sheep have quite different behaviours from cattle in respect of water, and cattle have had a lot of research done on what they do around water. The research shows cattle will defecate five times more frequently when they are beside a waterway than in the rest of their daily life.”

The objective of the research, Corner-Thomas says, is to determine if sheep have impacts on the waterway so that management options for dealing with sheep can be devised based on hard data and not anecdotal observations.

The stream where the trial has taken place is a typical small hill country waterway about one metre wide and no more than 30cm deep.

“One potential option, if sheep don’t use waterways, is to use a single wire electric fence that keeps cattle out but still allows sheep into riparian areas.

“This might be a way we can to some degree keep on top of weeds and also allow greater flexibility in our sheep production systems,” she explained.

Corner-Thomas says it’s possible that in the winter and spring, sheep in Manawatu, where the trial is being run, can get their entire daily water needs straight from grass.

She says there is also a possibility that reaction to water could vary from breed to breed, but the current trial is using Romney sheep because they make up such a large percentage of the national flock.

So far, the trial – using pregnant ewes with a single lamb – has been done in the winter, but the trial will continue into the spring, summer and autumn using the same sheep.

Corner-Thomas says they selected only singlebearing ewes because they knew they would have slightly lower water requirements than a twin or a triplet bearer.

From Tanzania to Palmy

Since his boyhood in his home country Tanzania, Aloyce Bunyaga dreamed of coming to New Zealand.

Tanzania has only about 40,000 sheep and they are not highly valued.

“When I was young I read much about NZ and later learned about the good education Massey University offered,” he told Rural News.

“It was my dream to come here and I am pleased the dream has come true.”

Bunyaga did his master’s degree at Massey between 2014 and 2016 and is now in his first year of PhD studies working on this sheep study. Bunyaga says he’s had great support from the university and its staff and is enjoying the project.

He says much of the set-up work for the cameras was done off-farm and it took just on two days to set them up in the field.

With the field work for this part of the trial over, the work is ongoing though the data is the next step.

“It’s demanding but fun,” he said.