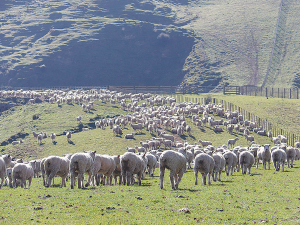 With less water and higher temperatures, Johnson says they've had to change their farming systems.

The so-called Forgotten Highway, between Taumaranui and Stratford, has many surprises to offer - if you care to stop and look. In farming terms, one of these is Paparata Station, near the settlement of Tokirima, owned by Trevor Johnson. Peter Burke recently paid a visit to this magnificent property.

Where else in the world can you drive peacefully along a highway where the bush and the farms meet the tar seal and, for a few kilometres, a gravel road?

In 1961, Johnny Cash extolled the beauty of Ireland with his song - Forty Shades of Green. If he'd been on the Forgotten Highway he may well have added a few more shades of green - such is the lushness, beauty and colour of the countryside.

About 50 kilometres from Taumaranui you'll come across one of the few signs along the road. The somewhat inconspicuous sign - Paparata Station - gives little insight to lies beyond the gate.

The owner of 7,000 hectare Paparata Station is Trevor Johnson - a man whose passion for farming has creatively transformed and managed the farming operation and set a model that other farmers could easily emulate. He has built up the property over many years to bring it to its present state.

In order to understand where Paparata is today, it's important to track the history of its development. Trevor Johnson boarded at New Plymouth Boys High School for five years and was head boy. After finishing school, he returned to the family farm at Tokirima. Then, at the age of just 21, he bought the 1,600ha Paparata sheep station, which at the time was in a rundown state and he developed it with his two brothers.

Then at the age of 30, and married to Trish with three young children, Johnson decided to take a complete break from farm life. The family moved to Palmerston North where they lived for three years, while Johnson completed a business studies degree. This then led to him moving to Hamilton and working for an accountancy firm. While he was doing that, he bought and managed a farm at nearby Te Awamutu, while still having an interest in the family farm and Paparata Station.

To cut a long story short, Johnson eventually bought out his siblings at the family farm at Tokirima and Paparata, then bought additional adjacent farms to create the present 7,000 ha property known as Paparata Station. This now runs a total of 65,000 stock units with a mix of 55% sheep and 45% cattle.

The farm itself is a mix of steep and medium hill country with some flats.

Driving around the property is easy due to the heavy investment in developing wide laneways and excellent gravel roads, one of which leads to a magnificent airstrip overlooking the whole farm. The airstrip has three separate runways, making it easy for pilots to cope with different wind directions. The scenery driving up to the tops, and from the high point on the farm, is quite breathtaking with Mt Ruapehu visible in the distance. Yet, the highest about 1,200 feet above sea level.

The views aside, Paparata Station under Trevor Johnson's astute stewardship is a high-quality working farm.

The cattle are Angus/Hereford cross and there are a total of 2,700 breeding cows, which are run on all the blocks. Their role is to groom the pastures for the various ewe flocks. About 500 steers are finished on the station with the remainder sold to traders.

"Initially we had a three way cross of Friesian/Hereford and Angus but we dropped the Friesian out because they produced too much milk and the udders got too big," Johnson told Rural News. "They also didn't really carry enough surplus on them, so when it got dry they were fairly hard to feed and their offspring were hard to sell."

Of the 24,000 ewes on the four properties, 1,500 are part of an elite recorded flock on the Heao block. This flock has been built up over the years and its main feature is that is the stock have a high tolerance to facial eczema, which was initially a significant problem on the property. Today, Paparata rams and ewe lambs command a premium because of their FE resistance.

Apart from the stock from the elite flock, Paparata sells about 30,000 lambs - half of which are finished on farm and the remainder sold as stores.

One of the recent challenges facing Trevor Johnson and his team at Paparata Station has been the changing climate.

Four into one goes nicely

Instead of running Paparata as one station, Trevor Johnson has divided it into four separately managed blocks - each designed to complement the other and run by four separate managers.

"Climate change and how quickly it's happening is the biggest challenge for us," says Trevor Johnson, owner of Paparata Station owner - 50km west of Taumarunui.