Getting things back on track at White Rock 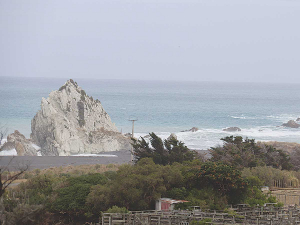 The stunning white rock formation that dominates the shoreline of White Rock Station, which the property is named after.

As well as the family reorganisation, Tim Ritchie and his cousin later invited well-known Wairarapa farmer and Romney breeder Derek Daniell to take a shareholding in White Rock.

The goal was to get it back to a state where it was a profitable and sustainable business.

Daniel’s Wairere Romney rams played a big part in lifting the station’s lambing percentage from just over 80% to the present 130%-plus.

Today, the 3800-ha farm runs 12,000 stock units, which is mix of sheep and cattle – the latter mainly Angus with a bit of Hereford in the mix.

The farm is summer dry, so there is an imperative to get the lambs off early to the store market and preserve the feed for the capital stock. Even the ewe lambs are grazed away from the farm and returned later for tupping. The same applies to grazing cattle off farm when there is a feed deficit.

“Having the capital stock – some 7000 breeding ewes and 400 cows – in good condition is the absolute focus of our business,” Ritchie says.

Another feature of White Rock is its all-weather airstrip.

Ritchie says when Derek Daniell came on board they undertook a major development programme to tackle scrub reversion – and the farm was in desperate need of lime, fertiliser and new grass seed. So, they constructed an all-weather concrete airstrip on one of the ridges above the farm.

It must surely rank as one of the seven wonders of the aviation world. It’s a downhill strip and the aircraft flies off the end of the ridge into the valley below. It would terrify most city types, but Ritchie says it means they are able to apply fertiliser at any time of the year.

It’s not just cattle and sheep, but advantage has been taken of the large areas of mānuka on the property to establish a lucrative mānuka honey operation. There are over 500 hives on the property, which provide White Rock with a significant income – especially since wool prices have fallen sharply.

Ritchie says the price they get for wool doesn’t even pay for the cost of shearing.

He says in terms of income, sheep are number one followed by cattle and mānuka honey.

One of New Zealand’s most historic sheep stations – White Rock – has a new lease of life thanks to family members who wanted to preserve the property for future generations.

A man who has spent more than 40 years in the meat industry says the best thing that happened to the industry in NZ was the UK joining the European Union in 1973.

Meat companies have now put in place a set of protocols that will allow stock to be killed and processed during the COVID-19 lockdown.

Can we open up India?

Despite global market instability due to coronavirus, January’s meat exports increased by 26% compared to January 2019.