Gap growing between top and bottom 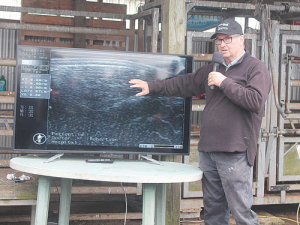 The difference today in the beef industry between the top-and bottom-performing cattle is greater than it has ever been, says Bill Austin, of Austins Ultrasound Ltd.

The gap between farmers using technology and genetics to improve their herds and those ignoring the technology is ever widening, Austin says.

The attributes for intramuscular fat in the Angus world are 32% heritable, weight and growth are 32-42% heritable; and retail beef yield has now gone up to 60% heritable, he says.

“Milk is only 10% heritable,” Austin says. “We have some huge advantages on the dairy industry if we want to move these things along.

“We don’t have any excuse really because we have such high heritabilities. It is a no-brainer if we want to improve balance sheets.”

Austin made the comments as he demonstrated ultrasound scanning on beef cattle at a genetics showcase day at Landcorp’s Kapiro Station in Northland.

His ultrasound analysis of beef cattle reveals marketable qualities like eye muscle area (EMA) and intra-muscular fat (IMF). The information can be used to improve the herd through selection.

There is definitely a place for this in the commercial world, he says.

“Until four years ago we didn’t do any commercial cattle. Now possibly a quarter of what I do is commercial herds -- scanning yearling heifers either just pre-mating or post-mating. We do an intramuscular scan and rib fat along with the EMA, so it’s cheap and breeders are using that to cull their replacement females.

“If they are buying good bulls to go over those females, then they are making progress pretty rapidly.”

Mt Linton has been using technology for a number of years and most people have heard their top results in eating quality grading through Silver Fern.

“There are real premiums in the market now through Silver Fern, Anzco, Angus Pure – to name just three.

“Intramuscular fat is part of the prerequisite for hitting those premium grades. The premiums are pretty serious; they are worth a lot of money per truckload of cattle.”

Traditionally our cattle have had twice the fat on the rump as on the rib.

“What we need to aim for is to get that rib fat and rump fat even,” says Austin.

“It is strongly heritable at 32-34%. If you put three generations in you are locking that trait into your cattle. I have a different take on longevity than most people. If cattle aren’t where we want them to be we need generation turnover – if we are prepared to buy the bulls to improve the product.”

As an example of improving the commercial end, Austin says a client he works with breeding Wagyu-cross cattle was getting only a 50% hit rate on the scale with the skin off. They started scanning his replacement females and culled whole lines of cattle.

“In three years we have shifted his hit rate from 50% to 80% on the scales. The marble score on a scale of 1-9 we have shifted up nearly two points, and that is worth a lot of money to him. That is just on the Wagyu side but similar premiums are available in other areas of the commercial beef world.”

The raw data is only a means to an end, says Austin. It is important that raw data is collected in a mob situation.

The stud scanning data is sent to the University of New England, Armidale, NSW, and put through the Breed Plan computer program. Each animal is measured against each of its peers within that mob. But it is also the most powerful user of pedigree – as in family relations.

The scan from the one animal and all his siblings, aunts, uncles, brothers of the sire and dam and all her relations are used to create the EBV. So several thousand animals can have an input into data on that animal.

“Breed Plan is the greatest user of pedigree known to man,” says Austin. “It actually puts beside every animal a figure for every trait used to create the individual EBV for this animal; so it is pretty robust.”