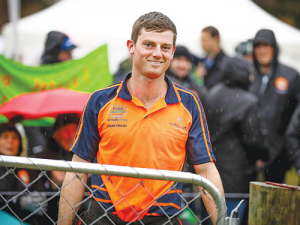 Patrick Crawshaw will take learnings with him on health and safety to the his farm.

2018 East Coast Young Farmer of the Year Patrick Crawshaw learned early in his career from ‘early-adopting’ farmers how to identify and manage risk.

Now he’s putting that knowledge into practice on the farm he and wife Isabelle have bought at Patoka, Hawke’s Bay.

Crawshaw (24), who also won the Agmardt Agri-business Challenge and FMG People’s Choice awards at the national Young Farmer of the Year finals, grew up on his family’s Angus stud, near Gisborne.

He gained a Bachelor of Commerce (Agriculture) from Lincoln University and then spent two years at the Pukemiro Station cadet farm at Dannevirke, then a year with Foley Farming Enterprises, Central Hawkes Bay.

“Growing up, mum and dad were always careful about health and safety and so were the people who worked at the farm: they were strong on always wearing helmets on motorbikes, but back then they didn’t have the formal processes they do today.

“I learned about liability and risk as part of my studies, but when I started doing work experience and was placed with progressive farmers – early adopter types –  I got my first insights into the practical application of that.”

At Pukemiro Station, where he began as a junior shepherd, progressing to become a block manager, Crawshaw again found a focus on health and safety leadership and a passion for showing young farmers “what good looks like”.

“We’d meet at the workshop every morning where we discussed the plans for the day and how to approach jobs safely. For instance, if it looked as though rain was near, we’d talk about how the ground might get greasy, and what would be the best vehicles to use. The ongoing message was, ‘if you aren’t confident something’s safe, seek advice from a manager’.

“We’d talk about anything that had happened; like if rain had washed out a new tomo near a track, we’d discuss whether to close the track or fence the tomo off.

“We also had more formal monthly meetings where health and safety was discussed. Topics included anything that had happened to create risk and how we were managing that. It led to an open culture of health and safety; it was business as usual and that got the ball rolling.”

At Foley Farming Enterprises, which finishes 35,000 lambs each year on 650ha, a big health and safety challenge was the wide geographical spread of four finishing platforms and a breeding block.

“Foley Farming have regular communication in a very similar way to Pukemiro,” Crawshaw says. “We plan the work, raise any issues and get the right processes in place.

“The biggest challenge is the geographical spread, but there’s a young team and everyone was keen to get involved with health and safety planning.

“We found WhatsApp was a good tool to stay connected and monitor activities. We set up a team group on the app and had a live team commentary going constantly, so we always knew where everyone was and what they were doing.”

Not surprisingly, risk identification and management was a key priority as Patrick and Isabelle prepared to move onto their 285ha sheep and cattle farm in late August 2018.

“The risk identification and risk management plan is a work in progress, which I’ll be able to complete once we get onto the farm,” Crawshaw says.

“It will just be the two of us working there, so that will involve a lot of working on our own and using contractors, both of which carry their own risks.

“We are going to be carrying emergency locator beacons and I’m putting processes in place for contractors. I’ll be using the Zero Harm Farm app, which makes it easy to set up sound, robust health and safety, hazard identification processes and contractor and visitor inductions.

“It’s straightforward and it’s good to have everything documented; that way, when contractors are coming on farm, you can simply go over what they will be doing with them and point out anything they might encounter on the farm.”

James Lawn has been named as the Taranaki-Manawatu FMG Young Farmer of the Year.

The new independent director for Young Farmers, Catherine McMillan is passionate about seeing young people find their place in the world.

A mate of the Hound reckons the outcome of this year’s Young Farmer of the Year contest should be a real concern to New Zealand’s Young Farmers and the annual competition itself.

A Turakina sheep and beef farmer has been named the Taranaki/Manawatū FMG Young Farmer of the Year.