Bane of barley endemic in seed 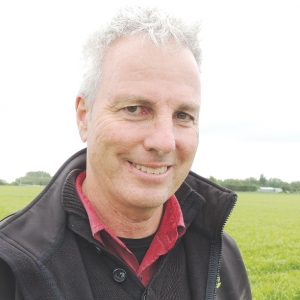 AGRONOMY TRIALS and aeroplanes were among the topics aired during the Foundation for Arable Research’s South Canterbury and North Otago field day late last month.

Scientists in Scotland have found ramularia, the bane of New Zealand barley in recent years, is both seed and spore-borne, but what the discovery means for control here remains to be seen.

Plant and Food’s Matthew Cromey relayed the latest findings on the disease to growers at the Foundation for Arable Research’s South Canterbury field day last month after a trip to the UK.

Besides finding the fungus is seed-borne, modelling by Scottish research institutions shows all growing areas in New Zealand are conducive to the disease now and will continue to be as the climate changes through to 2050. “So it looks like there will disease potential here in barley for many years to come.”

Having established the fungus is seed-borne, as well as spore-borne, Scottish researchers are now trying to determine the importance of seed-borne infection in epidemic development. One implication is it may carry different strains of the disease to new areas, assisting a spread of more aggressive or fungicide resistant strains.

Seed treatments don’t appear to be very effective on the causative fungus Ramularia collo-cygni which Cromey compared to endophytes in ryegrass. “Early infection is asymptomatic for a long-time. There’s almost a mutualistic, endophytic relationship. The plant grows better in the presence of the fungus as long as you don’t get symptoms.”

It’s when those symptoms emerge, causing loss of green leaf area and a consequent reduction in photosynthesis, that yield loss occurs. What triggers symptoms is the question. “It’s not just a wet season. It’s duration of leaf wetness. Regular drizzly rain and dew means you’re much more likely to get serious disease than if you get heavy rains but not for long.”

Once symptoms emerge the plant is riddled with the fungus so controls need to be applied before that. “If you wait until you can see the disease that’s too late. By then there’s probably a huge amount of innoculum inside the plant.”

Sunlight, as well as moisture, seems to be a trigger for symptoms developing, current thinking being the fungus releases toxins when exposed to ultra-violet light. “It may be why we see disease emerge more rapidly and clearly on upper leaves.”

In Europe the disease has become resistant to strobilurin fungicides and while there’s no evidence of that in ramularia in New Zealand yet, FAR is calling for samples from infected crops this year to send away for testing.

Cultivar resistance is another possible tool, however New Zealand’s cultivar evaluations generally use comprehensive fungicide programmes so identifying differences in disease susceptibility is difficult, Cromey told the FAR crowd. “But a lot of our cultivars are from Europe so perhaps there’s an opportunity to use their results,” he suggested.

Asked if New Zealand seedlines had been tested to see if they’re a source of disease, as has been found in Europe, Cromey said they have, and they are, although there isn’t a quantitative test to determine amount of infection. “Assure Quality have found quite a bit.”

Clean seedlines could possibly delay an epidemic, but would be unlikely to keep a crop disease-free as spores from infected grass or other barley crops are thought to “move a reasonable distance,” said Cromey.

Seed treatments don’t look likely to be of any use, as the only ones that removed seed infection also killed the seed.

Aquaculture – an opportunity to diversify

Aquaculture is the fastest-growing animal production sector, experiencing global annual growth rates of 6% over the past 15 years.

Both policymakers and scientists are struggling to deal with the issues of climate change and greenhouse gas emissions, says an expert.

Plant & Food Research’s Vaughn Bell has seen a lot of mealybugs in his time, but even he was stunned to see photos of infestations in Marlborough this past vintage.