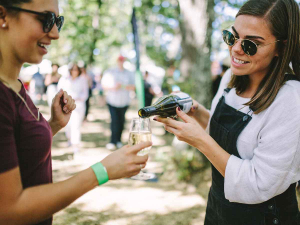 María Pérez Jiménez, a PhD student from Spain, is now collaborating with Plant & Food Research (PFR) scientists Drs Farhana Pinu and Emma Sherman to investigate how oral physiology affects the release of aromas during wine consumption. “I am interested in combining what we know about the chemical composition of wines with knowledge about how human physiology affects a person’s perception of the wine,” María says. “Ultimately this type of research might mean we are able to produce personalised wines for specific populations, such as different age and ethnic groups.”

Winemakers have long been interested in how aroma compounds produced during fermentation (typically ethyl esters of volatile acids and higher alcohol acetates) contribute to the increasingly popular fruity characteristics of many wines. Studies have shown that minor alterations in the concentrations of these compounds can lead to remarkable effects on wine flavour. Laboratory work has tended to focus on understanding how winemakers can manipulate concentrations when developing a wine’s unique matrix of compounds.

María is going further by focusing on what happens to these compounds when they encounter saliva. She hopes to characterise the type of chemical transformations that occur in the mouth to better understand how real-life physiology contributes to the release and perception of wine aromas (see Aroma Perception).

María is from the Institute of Food Science (CIAL) in Madrid and her PhD is supervised by Dr Maria-Angeles del Pozo Bayón, whose team is using novel in-vivo analytical techniques to measure the way aromas are released in the mouth and/or in the nose, and what contributes to their persistence while drinking. These include fully automated methods that are sensitive enough to detect the minute concentrations of volatile compounds during tastings by individuals and to also enable the processing of large numbers of samples for robust data analysis. The techniques have shown excellent reliability to measure individual differences in the release of known compounds associated with wine aroma and flavour.

Examining the data according to a person’s age (18-35 years versus over 55 years) has also shown measurable variation in the composition of saliva and the compounds associated with in-mouth aroma release. These age-related differences were also observed in terms of the persistence of aroma. Interestingly, the senior age group detected aroma attributes in red wine for longer than the younger group.

One question María is looking at is whether enzymes in saliva break down fruity esters into degradation products, some of which may lead to unfavourable flavour characteristics (such as carboxylic acids which are associated with unpleasant odours). However, the targeted analytical approaches used so far in her research have not identified new odorant metabolites that could be significant for wine aroma perception, which is why she is now collaborating with PFR scientists in New Zealand.

PFR has experience and equipment used in flavoromics research, an untargeted approach which allows for better detection of metabolites and potentially undiscovered compounds. Farhana and Emma are planning to start this line of work on New Zealand wines with the continued collaboration with the CIAL team.

María says the research has long-term applications for the wine industry. “We are learning about the behaviour of aroma compounds during wine tasting and how both the composition of the wine and differences in human physiology affect the perception of wine aromas. This will allow us to better understand consumers’ preferences and choices. Winemakers may be able to modify their techniques to improve the release of favourable aromas, and new additives may be designed that enhance their persistence and minimise the creation of unpleasant flavours when tasting.”

María presented her findings at a Wine Research Seminar in Marlborough last year.

Our sense of smell (olfaction) depends on volatile, airborne molecules binding to olfactory receptors, which results in neurons sending impulses to the brain’s olfactory system for processing and perception. Aromas from wine are perceived in three phases:

1. Pre-ingestion: Sniffing causes volatile compounds in wine to be transferred via the nasal passages to the olfactory receptors, resulting in perception of its odour.

2. Ingestion: Swallowing causes volatile compounds from mouth and throat surfaces to be transferred via the retro-nasal passages to the olfactory receptors, resulting in perception of its immediate in-mouth aroma.

3. Post-ingestion: Successive swallowing and breathing causes prolonged release of volatile compounds from the mouth and throat membranes, resulting in the persistence of aroma.

Hort systems must meet expections of the future

Plant & Food Research has just begun a major research programme focusing on designing horticultural growing systems to meet the expectations of society in the future.