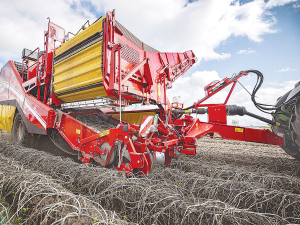 The Grimme EVO 280 two-row bunker harvester is getting a major upgrade.

Originally released in 2018, the Grimme EVO 280 two-row bunker harvester – featuring three large separators and an intake for crops, such as potatoes, onions and carrots – is getting a major upgrade.

The EVO 280 is now equipped with a redesigned version of the well- known NonstopBunker, allowing continuous gentle unloading during harvest on the move. It offers a capacity of up to 6-tonne, in addition to the 8-tonne standard bunker.

The increase in bunker capacity also provides a significant lift in the transfer height and width, meaning greater distances can be kept between the harvester and transporting trailers and high transport vehicles can also be loaded easily.

The continuous unloading process during harvesting means the bunker is emptied on one side, while being refilled on the other side. When a transport vehicle is full, the design of the GRIMME NonstopBunker allows the bunker floor to be reversed without damaging the crop, while also utilising the full capacity at any time.

The unloading time of around 45 seconds, is about half that of conventional bunkers with two bunker floor chains. Meanwhile, the removal of an additional transfer-step in the bunker floor is said to increase output by around 30% over a standard bunker.

For more traction, less soil damage and reduced energy consumption, a hydrostatic wheel drive system can be fitted. This offers a total thrust of over 2.3 tonnes, a power-boost function taking this rating to 2.6 tonnes and a transport width of less than 3 metres. The latter is achieved by using a telescopic axle that can be retracted by 500mm, while also delivering good stability when extended.

The “Turbo Clean” System allows the cleaning of certain webs and separators, with drives stepped up to maximum speed to achieve the cleaning effect – either automatically at the end of a run or manually by the operator.

At the picking table, height adjustable steps allow pickers to work at the most comfortable working height, with options including a waterproof storage box, increased padding on the picking table, drink holders and a 15-litre hand wash tank. A new lighting system also enables the picking staff and the driver a good overview of the crop flow.

The hedgehog web on the third separator can be equipped with plates of long, soft hedgehogs. Stones and clods then sink deeper and can be separated more efficiently from the crop flow.

New Plymouth-based AgriQuip has been appointed as the exclusive importer and distributor of the Major Equipment brand, with the aim of distributing a selection of products from the company’s range of grasscutting equipment.

Made in New Zealand is a feature that looks at the wealth of design and manufacturing ability we have in New Zealand, making productive and cost-effective products for the agricultural sector. This week we take a closer look at FIL, catching up with GEA Farm Technologies NZ chief executive officer, Campbell Parker.