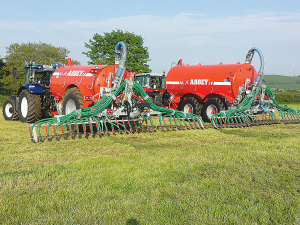 Of the food intake ruminants use for maintenance, milk production, rearing a calf and/or to produce meat, as much as 85% can end up as waste. Waste that can be used as fertiliser.

This waste needs to be stored and used in an environmentally friendly way.

And while many farmers consider slurry a waste product, growing numbers see it has fertiliser value and so can reduce bought-in fertiliser.

Fertiliser value depends on variables such as time of application and weather. Applying it in cool moist weather in spring rather than summer increases the amount of ammonium-N captured by the crop and reduces losses of N resulting from ammonia volatilisation.

The method of application also has a major bearing, for example, applying slurry below the crop canopy with a vertical trailing shoe spreader allows the grass to harness more of the ammonia and reduce ammonia loss to the atmosphere.

Irish company Abbey Machinery, in its recent Guide to Slurry Management, refers to six key steps to get the best from effluent and realise its eventual potential.

The process starts with proper storage and agitation of slurry to get a homogenous mix, picking the right equipment to transport the slurry, application method, environmental considerations, minimising compaction and using technology for accurate application.

Abbey makes a big range of manure spreaders and slurry tankers and pays due attention to the method of application.

Its trailing shoe applicators are available in 6m and 7m working widths with 24 or 28 outlets of 50mm diameter across the unit. Feeding is by a Vogelsang ExaCut macerator that helps create a homogenous mix while also reducing potential blockages. The effluent is fed to hardened cast iron shoes carried on sprung legs attached to self levelling booms.

The Abbey Tri App system has a 7.5m working width comprising individual floating sections and a forward folding boom design. Again, fed by a Vogelsang distributor with an auto reverse function, the unit can also carry a 600m reel assembly.

The cereals applicator is set up to cover 12m. It uses much the same technologies as other applicators in the range but has rigid feed pipe ends to ensure application on the ground next to the plants for optimum utilisation.

A further option is a 7.5m door mounted (DM) band spreader that can be retro fitted to the rear door of a slurry tanker. The machine is fully galvanised.

The unit is mounted close to the tanker body to optimise weight transfer to the tractor hitch point, and it has vertical folding booms for easy transport.

See the Abbey team at the Irish Enterprise Exhibit at Fieldays.