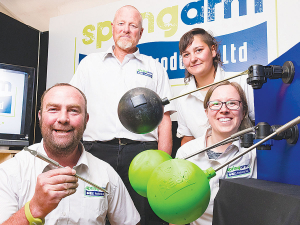 The Springarm team picked up the Prototype Award and a cheque for $10,000 at this year's Fieldays for inventing and developing a ballcock arm that won't break.

Sometimes the simplest product design can be uncannily clever and offer real benefits to the end user.

Two such designs caught the eye at the Fieldays Innovation Awards, one a godsend to anyone working with livestock and the other making life just a little easier for sheep farmers.

Walking away with the Prototype Award and a cheque for $10,000 was Springarm Products Limited. The company has adressed the age-old problem of inventing and developing a ballcock arm that won't break.

Instead of snapping when put under pressure by thirsty or inquisitive animals, the Springarm flexes - saving water, time, money, and reducing stress.

It was conceived by farm manager Ric Awburn; he was standing at an empty trough one evening, watching the cows nudging the ballcock, causing the arm to snap. He thought, "if only the arm could give a little". Fast forward two years and he has a durable and reliable ballcock arm that's easy to install on all types of valves and will be a saviour to livestock owners.

Throughout the Fieldays, a steady stream of farmers was handling the Springarm, wondering - no doubt - why they couldn't have thought of the simple solution.

"We received non-stop, positive feedback from farmers coming through who've been facing water supply issues for a long time," director of Springarm Products Limited, Marianne Awburn, told Rural News. "Many had relief on their faces as there's now a solution to a problem they've faced for so long."

At the other end of the spectrum, two farmers' daughters, Stacey Bell and Georgina Ranger - both students at St. Peters School Cambridge - have come up with the clever, simple and aptly named 'Mark It' drench gun.

The stand-out feature was an attachment at the base of the nozzle, taking the form of a round boss, which houes a sponge. Soaked with a food dye, after the animal is drenched and the nozzle is withdrawn from the mouth, the sponge leaves a streak of dye on the animal's cheek.

It is designed to fit all types of drench guns. The clever duo suggested the simple addition allowed users to be sure all stock had been drenched, removing the problem of under or overdosing animals - saving both time and money.

Made in New Zealand looks at the wealth of design and manufacturing ability we have in New Zealand, creating productive and cost-effective products for the agricultural sector. Machinery editor Mark Daniel takes a closer look at Trimax Mowing Systems, catching up with owner and founder Bob Sievwright.