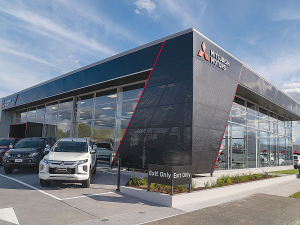 MMC’s new identity marks the newly built Morrinsville dealership as a distinctly modern showroom. It has a black diagonal enfolding the building’s front left corner and a large black portal marking the entranceway.

“We wanted to build a new, modern showroom that would take our business to the next level, which we and the town could be proud of,” Russell says.

The new branding was formally unveiled at an opening event on Saturday May 18. The glass walled showroom showcases the striking architectural aspects of the new MMC branding. Inside it’s concrete, timber accents and soft furnishings. The building design, material suppliers and builders were all local.

“People have been really receptive. I’ve had a lot of positive feedback from locals on how great it looks day and night.” Russell says.

The efforts of Russell and his wife Catherine garnered praise from Mitsubishi NZ chief operating officer Daniel Cook. He said the benchmark set by the Russells will reinforce Mitsubishi as a fresh, forward thinking brand with a modern aesthetic Kiwis can relate to.

MMNZ says it plans to roll the new branding across its entire dealer network over the next three years.

“We look forward to this next chapter as we build towards our goal of 10% market share,” Cook said.