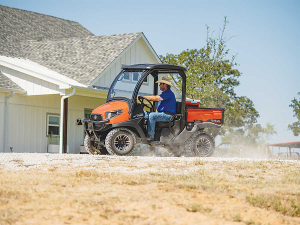 The recently introduced M5-1 ROPS Series, available in standard or narrow configurations, should prove useful to those enterprises with height restrictions or a need to operate in enclosed spaces or on uneven surfaces.

It is powered by a 3.8 litre engine, offering 93 or 103hp, at an engine speed of 2,400rpm. The tractor has synchronised, six-speed transmission with three ranges and offering 36 speeds, which is said to offer a speed for any eventuality.

The operator station sees a flat floor layout, making access and dismounting easy. Meanwhile, the shorter stance of the tractor allows its driver to keep in close contact with colleagues who might be working close by, according to GM marketing for Australia and New Zealand, Malcolm Owens.

Another new addition to the Kubota range is the RTV 520 Utility vehicle. This machine draws on the tried and tested RTV 500, with a bold new look, increased suspension travel via a 5-link rear suspension package and an increase in engine capacity.

Featuring a hydrostatic transmission, the vehicle benefits from precise speed control and engine-braking while travelling on downhill inclines. Offering a choice of 2WD, 4WD and difflock, the new model uses a new water-cooled, twin cylinder engine. With output of 17.4hp, the new machine is as quiet as the previous model, with noise levels at the operator station kept to 83dBA.

Elsewhere in the range is the R540 compact wheeled loader, which replaces the Ro65 mode. The new model includes new features such as a redesigned cabin, multifunction joystick and increased load.

"Additional space and a simple design helps to deliver better overall visibility in both the cabin and canopy formats," Owens adds. "While the new pilot-controlled joystick and its integrated auxiliary valve switch helps create a smoother operational experience."