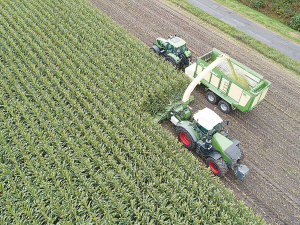 Krone has developed a prototype reverse-drive forage harvester that has been undergoing testing in maize.

Anyone familiar with precision grass harvesting will remember the domination of the drum-type trailed harvesters of the 1980s and ‘90s.

This was overtaken by the popularity of flywheel type machines, which delivered more output, less fuel consumption and a better chance of surviving foreign object ingestion.

Those flywheel-based machines evolved from rear-linkage mounted, reverse drive machines that were the norm when forage maize became popular in northern Europe. This was at a time when self-propelled units were only just starting to appear.

German harvesting specialist Krone is now looking to turn the clock back and creating a sense of déjà vu with its latest development project – a prototype reverse-drive forage harvester that has been undergoing testing in maize.

Designed to be mounted on prime mowers like the Claas Xerion 5000 or the Fendt 1050, the prototype weighs over six tonnes and can be equipped with Krone’s six to 10 row maize, conventional grass pick-up or direct-cut, whole-crop headers.

It features a chopping cylinder from the Big-X harvester range, and hydraulically-driven header and feed rollers.

The prototype is said to be a match for Krone’s Big-X 480 cousin in terms of output and chop quality, with reduced fuel consumption and a significantly lower capital cost.

Given the absence of power outlets in many remote buildings on New Zealand farms, there’s every chance of ending up with a flat battery when away from civilisation for an extended period.

Kuhn has bolstered its mower conditioner range with the addition of two rear mounted/ vertical folding models with a 3.10m working width.

While we are used to hearing about the latest hi-tech tractors or machines winning medals for technical innovation, it seems that in the livestock sector, designers and manufacturers are also taking awards, often for developing solutions for more basic problems.