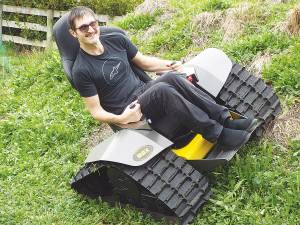 Jason Jack on the TRX-Max.

A keen outdoorsman, Jack refused to let reduced mobility get the better of him. So over the years, he built several motorised conversions, largely based on quad bikes. Unfortunately, those quads didn’t go down too well with others, as they were considered noisy and harsh on the environment.

This led to Jack heading down the electric route, where after five years of research and development, he recently released the TRX-Max. This is a purpose-built vehicle that offers able and not so able-bodied users the ability to head into difficult terrain with ease. The unique vehicle is centred on an easy-access platform, which in turn houses a supportive rally-style bucket seat. Power is derived from a 60-volt lithium-ion battery pack that drives twin electric wheel motors at each side of the machine.

The running gear features Camoplast composite tracks running on intermediate idler rollers, with the belts centralised via integral lugs that engage with the drive wheel.

Largely self-cleaning, the tracks offer the ability to travel over the most difficult conditions.

Weighing in at around 160kg and capable of a 20km/h maximum speed, the TRX-Max has an overall footprint of 1200mm wide by 1300mm long. This makes it is easily transported in a small trailer to the intended area for use.

The $30,000 plus GST price makes it comparable with high-end side by sides. Jack reckons that a $2 plug-in recharge will result in three to five hours running time – depending on terrain and speed. It also has the ability to also carry a spare battery.