Fetch me a beer while I seed the bottom paddock 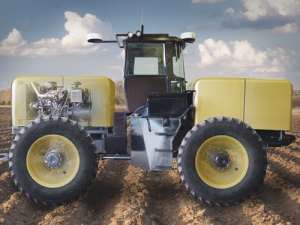 Autonomous tractors may just be coming to a paddock near you.

As AUDI, BMW, Ford and even Google talk about driverless cars in the next five years, a North Dakota company is marketing the idea for agriculture.

Autonomous tractors may just be coming to a paddock near you.

The Autonomous Tractor Corporation recently demonstrated such a tractor, which combines diesel electric drive and a navigation and safety system called AutoDrive.

But are we ready for such technology?

Over the last decade we have learned to trust autosteer systems which allow much greater accuracy, in some cases down to 2cm. John Deere has perfected an automated headland turn with its iTec Pro system; so what's to stop you taking the tractor to the paddock, putting it to work, then going home for breakfast? Apparently not much.

The AutoDrive systems can be offered in four stages, to introduce users to the technology gradually and see them move up to succeeding levels of automation until they reach stage 4 and full autonomy.

At stage 1, the operator manually drives the modified diesel-electric tractor, before moving to stage 2 – advanced GPS guidance with two RTK transponders set up in the paddock and a further two units mounted on top of the tractor.

These four navigation devices are said to ensure greater accuracy than current units which usually use a mobile unit on the tractor and another mobile RTK unit or a fixed transmitter. The system still has the potential for dropouts however, as the GPS can be affected by solar disruptions.

At stage 3 a gyro-mounted laser steers the tractor but still uses the onboard GPS to confirm its course.

At stage 4 a radio system is installed over the top of the GPS RTK and laser systems, giving full autonomy without the need for a driver, other than an initial 'teach-in' where the operator trains the artificial intelligence for a particular task.

Whether the industry is ready for it now, who knows? But it could be just the thing in a Rugby World Cup year, when grass needs sowing and the ABs are playing the Springboks on the big screen.

Fetch me another beer and a pie.

Recently released in Europe, with expected delivery yet to be confirmed for New Zealand, the new Valtra A series tractors see a range of new transmission options that will get those looking for a compact workhorse.

Claas's Axion 960 CEMOS tractor has been recognised as the most sustainable tractor in the prestigious Tractor of the Year awards.