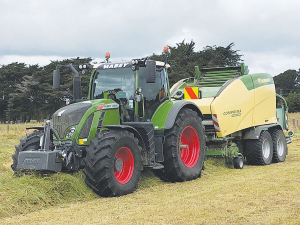 Founded 22 years ago, Mabey Contracting Ltd, based near Pahiatua, services clients throughout the Tararua, Wairarapa and Manawatu regions.

“We find that all the Krone gear is built really well. It is robust and it lasts,” he says.

“The first Comprima CF in the country was demoed on the farm and never left,” Mabey recalls.

“We immediately saw the benefit of a combination baler-wrapper, instead of using a baler and individual wrapper or tube wrapper, saving on a labour unit and leaving a nice, wrapped bale behind – everyone’s happy.”

Having run a Krone Comprima CF 155 XC baler-wrapper for six seasons and with thoughts about upgrading to a newer model, mother nature intervened.

“Following the spring, with a combination of poor weather for silage making and excellent grass growth, we found ourselves struggling to get all the work done and we were falling behind,” Mabey explains.

Being aware that Krone importers Tulloch Farm Machines had just landed the first of the latest Krone Comprima CF 155 XC Plus balerwrapper models into the country, he contacted John Tulloch about availability and got to lease it on a short-term basis.

“The CF 155 XC Plus is the same baler as the one we have – it’s just the latest model. We did about 3,000 bales with it, helping us to take a lot of pressure off, and it gave us a good chance to see how the new model performs. Suffice to say we didn’t want it to leave,” Mabey adds.

“We ran it alongside our old Comprima most of the time. It was interesting to see the XC Plus producing 70 bales an hour, compared to the old one doing 50 bales an hour under the same conditions.

“The guys didn’t want to see it go. They were so impressed with it that I asked Tulloch Farm Machines if I could buy it there and then, so it could stay for the rest of our season.”

Unfortunately, the new baler-wrapper was committed to a nationwide demonstration tour, but after returning to Masterton, Mabey was invited to purchase it.

“It has better technology and Krone has increased the speed of the machine throughout. It’s easy to operate and service and has a better hydraulic system,” he explains.

“We have always been impressed with the Krone’s ability to put out consistent, high quality bales, regardless of the changeable conditions where we work, but the new machine has taken this to a higher level.”

A host of new features includes auto-greasing, meaning one less thing to worry about after a long day’s baling, and the ability to carry 12 rolls of wrap instead of 10, which can save a trip at night when you’re close to running out.

Mabey Contracting offers clients baleage and hay, changing between a 10 bale and 14 bale equivalents, so Andrew appreciates the versatility of the machine.

ISOBUS technology means connectivity and operation is easy, while the addition of a second camera lets the operator keep an eye on the net feeding in and the wrapper.

“I am still going to keep my old machine, so we will be able to speed things up hugely.”

Mabey is looking forward to the new season running both machines, the new unit behind a 240-hp Fendt, while the older model will be powered by a Case IH Puma.