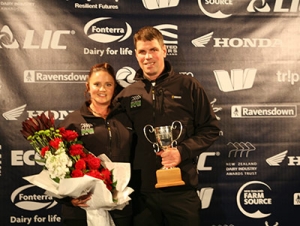 The winners of the 2015 Southland-Otago Sharemilker/Equity Farmer of the Year award say they strive to be the best.

Jono and Kelly Bavin won the major title and $12,150 in prizes at the 2015 Southland/Otago Dairy Industry Awards held in Gore. The couple are in their third season 50% sharemilking 500 cows for Blair and Rachael Evans at Tussock Creek.

They have plans to enter an equity partnership milking more than 600 cows and Jono is also interested in industry leadership, through a role on the Fonterra's Shareholders' Council.

"We are strong communicators with the farm owner and other key stakeholders, and like to keep everyone informed on what is happening on the farm so there are no surprises."

The Bavins also operate a traditional pasture-based system. "We aim to feed the cows to the full potential on a grass-based system. We keep things basic to keep costs low and have a reduced impact on the environment."

Jono, 32, has been in the industry since leaving school in Wellington at the age of 16 to study farming at Telford Rural Polytechnic. The couple has progressed through farm working, managing, and lower order sharemilking since then.

This was the couple's second time entering the awards and this time they dominated, also winning five merit awards for leadership, health and safety, recording and production, farm environment and risk management.

Farm Manager winners, Nick Templer and Anieka Venekamp, have complementary strengths that combine to make them a strong team.

The couple are in their third season contract milking 650 cows for Lyall and Jan Hopcroft at Balfour. Anieka, 29, has been in the industry since leaving school 10 years ago while Nick Templer, 28, left sheep and beef farming in 2009 to go dairy farming.

"We have mixed strengths. Nick is strong in financials, HR, young stock grazing, and the tractor work while my strengths are in animal health and breeding, and pasture management. Together we think we make a very strong team," Anieka says.

"We're also really passionate for the industry. We're focused on achieving our goals and running a profitable and sustainable business for ourselves and our farm owners."

The couple's goal is to enter an equity partnership or to go 50% sharemilking within two years.

It was their third time entering the awards, with Nick placing second in the 2012 Southland Dairy Trainee of the Year competition.

"The awards really help in getting to know all aspects of your business especially the areas that you are weak in. They are also good for networking and meeting like-minded people and building our confidence."

In his second season dairy farming and in his second time entering, Jeremy Anderson has won the 2015 Southland/Otago Dairy Trainee of the Year title.

He says the awards had been beneficial in meeting people, testing his skills and gaining feedback from judges on areas needing improvement. "There are lots of people involved in the dairy awards, all of which are top of their field. This was a great way to meet them and be inspired, as well as putting my own name out there."

Having grown up on a sheep and beef farm, Anderson became a qualified builder and worked as a builder for more than six years before switching careers to dairy farming. His goal is to progress up the industry and grow equity to ultimately achieve farm ownership.

Further details on the winners and field days are available here www.dairyindustryawards.co.nz.