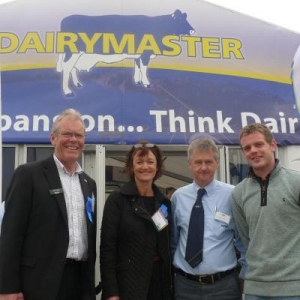 He was a guest of the National Ploughing Association and Enterprise Ireland, the Trade and Investment board of the Irish Government.

Dromgool had the opportunity to meet with Ireland's Minister for Agriculture, Simon Coveney, and senior officials of the NPA, to discuss the deepening relationship between the two agriculturally-based countries.

With the championships expected to attract over 200,000 visitors over a three-day period, Dromgool visited leading agricultural machinery firms, many of whom have exhibited at Fieldays. He was impressed with both the scale of the ploughing championships as well as the level of innovation of the Irish agricultural Industry.

Dromgool says "of the many synergies between both events, the focus and growth of innovations is paramount to the continued success within the primary sectors of both countries".
Both countries have demonstrated resourcefulness in their approach to solving farming challenges.

"I am keen to explore a collaborative relationship with the National Ploughing Association that will encourage a healthy exchange of information and representation at our respective events."