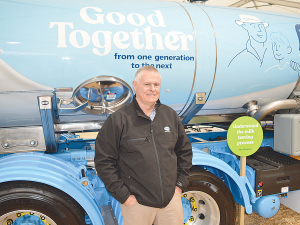 Fonterra chair Peter McBride has already been on the phone to Damien O’Connor in wake of the strong outcome of the farmer vote.

Fonterra chairman Peter McBride was immediately on the phone to Agriculture Minister Damien O'Connor after the result of last week's capital structure vote.

O'Connor had earlier expressed reservations with the proposal. But McBride told Rural News that O'Connor was pleased with the positive outcome and the strong farmer support.

The proposal received 85.16% support among farmer shareholders. Turnout was 82.65%.

"The review process we conducted and the turnout was pretty important to the Minister," says McBride. "The strong mandate from farmers also helps."

McBride says the co-operative will now work with Ministry for Primary Industries and O'Connor's office to help prepare documents for Cabinet. A select committee hearing may also be on the cards.

The consultation process started in May and more than 5000 farmers either made online submissions or gave feedback at meetings.

McBride says he is chuffed with the result.

"It doesn't get any better than this, does it."

He says he is a bit worn out after several months of farmer meetings, but enjoyed getting to meet many shareholders.

The new flexible capital structure would reduce the number of shares farmers need to hold to join the cooperative from one share per kgMS to one share per 3kgMS.

It would also allow different type of farmer to hold shares in the company, and cap the size of the associated shareholders' fund to 10% of all shares on issue.

The changes were aimed at securing Fonterra's financial future and retaining farmers, amid the prospects of falling milk supply and competition from other milk processors that do not requires capital investment from farmers.

McBride admits he wasn't very confident at the start of the process.

"But as we clearly articulated our position on the 10-year plan and made changes to the proposal based on feedback, I grew more confident.

"Six weeks ago, I started feeling pretty confident but you are not sure until the voting results come out."

Barron says a huge amount of work has gone into the consultation process with farmers.

"But this was highly important to farmer shareholders and they engaged and provided high feedback to us."

"There's a big job ahead to get the regulatory approval needed."