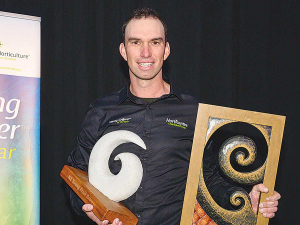 The 2019 Young Grower of the Year Jono Sutton.

Horticulture is a great career to investigate for young people deciding on their future, says 2019 Young Grower of the Year, Jono Sutton (26).

“If you have an interest in working outside and being able to produce something every year I  suggest horticulture is somewhere to look,” Sutton advises young people.

“Because it is a seasonal industry you’re never doing the same thing for very long. There is always something around the corner which lasts for a couple of months and then there’s something different again and vice versa so there’s a lot of variety.”

He agrees not enough young people are coming into the industry but that presents an opportunity in itself.

“Businesses are generally owned by slightly older people and they keep getting older and not a lot of younger people are coming through,” he told HortNews.

“So if you can get into a place where there is potentially a succession plan there for you then there are many areas of opportunity.”

When Sutton came out of school he did a year at another orchard before joining his family boysenberry and apple business started by his grandparents. The idea was to get experience elsewhere before joining the Nelson family business full time.

“My role is pretty vast, I do all sorts of things. I do weekly planning, staff management, machine operation and quite a bit of repair and maintenance.”

In summer there are other jobs again including packhouse management.

Sutton was competing in the national Young Grower competition for the second time.

“Doing it once prior is of much benefit. It was a very enjoyable experience and all of the modules are hard so they test your knowledge at quite an advanced level.

“The personal development you get from it is massive so it is very valuable.”

Sutton says some past winners have gone on to do amazing things in horticulture, “so to have my name next to theirs is overwhelming”.

HortNZ chief executive Mike Chapman says the Young Grower of the Year is important because it highlights horticulture as a vibrant career for young people.

“Our $6 billion industry continues to grow in response to worldwide and domestic demand for fresh healthy food. At the same time, our industry is responding to new requirements, particularly in the areas of freshwater, land use, food safety, and health and safety.

“These areas offer young people many and varied career opportunities. I am positive that all entrants in 2019’s Young Grower competition have benefited from the experience and will continue to grow and support horticulture.”

Sutton proved his impressive skills and knowledge throughout the competition. As the regional Nelson finalist, he was up against six other contestants from around New Zealand in the Tauranga finals.

Sutton’s grandparents came to support him.

“It’s great to have genuine support where, win or lose, they think you’re the best anyway,” said Sutton.

“They’ve been in the industry since the 1980s, when they transferred from agriculture to horticulture with the help of my father. For them to be able to pass the baton on to me is a real blessing.”

The annual Young Grower of the Year competition is run by Horticulture New Zealand and supported by platinum sponsor, the Horticentre Charitable Trust.