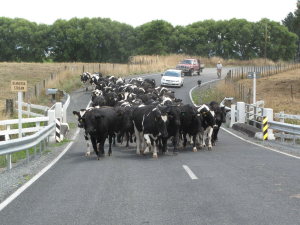 Farmers who do not update their NAIT details before Moving Day are putting the whole industry at risk and will be referred to MPI’s NAIT compliance team, says OSPRI.

Farmers who plan to move farm or livestock over the Moving Day period (late May to early June) must update their NAIT accounts says OSPRI.

This means confirming all NAIT locations and contact details before moving, while ensuring any outstanding livestock movements are addressed and accurately recorded.

Last year, over 750,000 farm-to-farm movements were recorded and confirmed in the NAIT online system during the Moving Day period.

“To support the current tracing activity for M. Bovis, it is vital farmers accurately record and confirm movements in the NAIT online system,” says head of NAIT Kevin Forward.

“We appreciate farmers have plenty to consider prior to Moving Day, but we would ask them to focus on NAIT. Those who choose to ignore requests about re-registering, will be referred to MPI’s NAIT compliance team for follow up as they are putting the whole industry at risk, not just their livelihoods.”

Farmers who move address are advised that the NAIT number is fixed to the property they are leaving.

“Depending on your circumstances, you may be assigned the existing NAIT number and become the PICA at your new location. This can be done online or by calling the OSPRI Contact Centre.”

“Otherwise, you must register a new NAIT number for the farm you are going to,” says Forward.Livestock going off-farm from a TBfree Movement Control Area (MCA) for grazing or relocation must complete a TB test ideally within 60 days, prior to the movement.

“If you are moving animals for grazing, remember to complete an Animal Status Declaration (ASD) form and provide this to the grazier for his records,” says Kevin.

“Once you’ve tagged the animals, make sure you register them in NAIT, otherwise we can’t track the animal’s movements after they’ve gone off-farm,” says Forward.