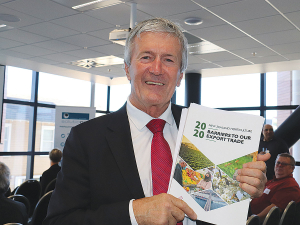 Damien O'Connor concedes that we may reach agreement on FTAs that might not be everyone's ideal, but a compromise that offers value to both parties.

Agriculture Minister Damien O'Connor has just returned from a two week trip to the northern hemisphere, where he met with politicians and officials from both the EU and UK. He says it was a worthwhile and essential trip, from a timing perspective, to give impetus to both the FTA negotiations.

However, O'Connor pointed out to Rural News thagt in the case of the EU, the commissioners and negotiators told him they have to be mindful of their constituents in the 27 member states and that NZ has to be conscious of that.

"Ultimately we have to reach agreement that might not be everyone's ideal, but it will be a compromise that offers value to both them and us."

O'Connor says the great value in the trip was being able to meet in person some of the top people in both the EU and UK. These included meetings with UK Trad Minister Liz Truss, EU Trade Commissioner Valdis Dombrovskis and Agricultural Commissioner Janusz Wojciechowski.

"Those meetings were invaluable and provided me with an opportunity to counter some of the misunderstandings of what we are trying to achieve under the FTAs," he told Rural News.

"I assured them that New Zealand doesn't want to undermine the value of their or our products in the marketplace. Also, that we produce high quality goods for high value customers and we want to complement what their producers put into the market and not openly compete."

O'Connor says he reminded UK sheep farmers that if they produced high value product, they would now have the opportunity to look for export markets beyond the EU where their meat has traditionally been sold.

He believes they understood his message and took it on board.

O'Connor added that he took the opportunity to remind them that, while NZ may be a large player in the export of sheep meat and dairy products, we are still only a small proportion of world dairy production. He emphasisd that much of our product arrives in their off-season and is complementary to their local production.

"It was a case of reassuring them that we are just as committed as they are to high animal welfare standards, high environmental management practice and the inclusion of biodiversity as part of our farm systems," O'Connor says.

"These reassurances are important, as they will speak to their constituents in both the UK and across the EU member states."

In respect to the EU FTA, which has been going on for a number of years, O'Connor praised the efforts of the NZ negotiators whom he says have done an exceptional job on behalf. He says his meetings with EU politicians and officials were positive.

"We met with a whole lot of people from trade commissioners, agricultural commissioners, members of key committees and trade unions," he added. "All were concerned that the trade agreement would not undermine any of their interests globally and we gave them that absolute assurance."

O'Connor hopes that early next year, they will reach a point where they can get a general agreement with the EU.

Damien O'Connor says the situation with the UK FTA is different and both parties have agreed to try and reach an agreement in principle by the end of August.

However, that doesn't mean that an agreement will be signed then. It may take several more months before any FTA could be ratified.

"The pressure is on and I hope that we can reach that self-imposed deadline," he told Rural News.

O'Connor concedes that there are some "sensitive issues" - code for agriculture - that need to be negotiated and some of those haven't changed over the years. But he adds that it is a different world now in which both parties are reliant on trade for our existence.

"The UK is coming to terms that being separate from the EU means they have to embark upon a global strategy of connecting with as many markets as possible. This includes through the Comprehensive and Progressive Agreement for Trans-Pacific Partnership (CPTPP), which they have requested to join.

"I think they realise it's a big challenge and they only have the capacity to progress these trade deals one at a time."

O'Connor says he assured the UK of NZ's support for seeking membership of the CPTPP, but also highlighted to them the high standards of trade policy required to reduce barriers to trade.

Fourteen days in managed isolation gave Damien O'Connor time to reflect on the trip and says he's pleased with the outcome.

He says during the 14 days, it was full-on work and catching up with reading.

"Two weeks in the one place is not everyone's cup of tea and certainly not mine, but I think most people who have been through it realise that it is essential to keep our country free of Covid," O'Connor told Rural News. "During the weekends, when I wasn't working, there was Netflix and some sporting events such as the Tour de France, the rugby and football."

O'Connor says he accepts being in MIQ is part of the job of remaining connected with the rest of the world and probably won't be the last time he'll be in this situation."