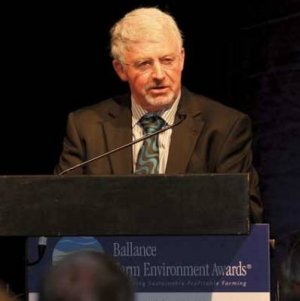 North Waikato farmer Jim Cotman has stood down from his role as chairperson of the New Zealand Farm Environment Trust after six years at the helm.

"Throughout my years of involvement with the trust, one constant has been the achievements many farmers have made in the stewardship of our land and resources," he says. "This flies in the face of comments made by some bigoted and probably politically motivated commentators regarding farming in general."

Cotman says it has been a huge privilege to lead this "brilliant organisation" and he has been inspired by the efforts and successes of his fellow farmers.

"The celebration of their achievements is important and that's something the trust set out to do right from the very start."

Speaking at the annual meeting in October, Cotman said the trust was in good heart, with a strong balance sheet, an excellent team of volunteers and a fully-committed family of sponsors and partners dedicated to the promotion of profitable and sustainable practices on-farm.

"This now allows the trust to pursue its plans to further grow and support the Ballance Farm Environment Awards within the regions they operate."

Encouraging nationwide regional involvement is another key aim for the trust. Cotman says those regional councils currently supporting the awards "recognise that they and the trust's other environmental leadership projects are a very effective way of promoting good practice".

Appointed NZFEA trust chairman in October 2006, his association with the Farm Environment Awards started 14 years ago while he was working for NZ Landcare Trust.

"Gordon Stephenson [Awards founder] tapped me on the shoulder one day and asked me if I'd get involved with the judging side of the Waikato awards."

Under his chairmanship, the trust continued to develop the awards as the premier showcase for farmer-led solutions to environmental issues.

The awards now operate in nine regions throughout the country, and the trust has formed strategic partnerships with a wide range of industry groups and agribusiness organisations.

Cotman, who with wife Raewyn owns a dairy farm at Waerenga, east of Te Kauwhata, says his involvement with the trust has been "fun", even if it has meant long hours away from the farm.

"Raewyn has been very supportive and she's picked up a lot of the workload on the farm for me. That's enabled me to get out there and enjoy the job of meeting the farmers and agribusiness people I find so inspirational."

Cotman urges farmers and agribusiness people to read NZFE Trust's annual report which is posted on the trust's website. (www.nzfetrust.org.nz)