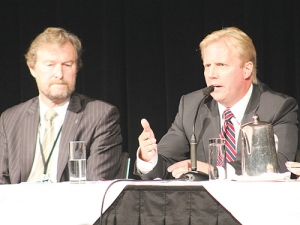 Japan declined to eliminate its tariff on beef, but cut it from the current 38.5% to 9% under full implementation of the TPP.

"That is the lowest tariff NZ has agreed with anyone in a free trade agreement," said New Zealand's chief trade negotiator David Walker at the TPP roadshow in Auckland

"It will help even up for our meat exporters the current disadvantage they are suffering in Japan against their Australian competitors who already have a bilateral agreement with a lower tariff applying.

"That is a good deal for our meat exporters even though we would have preferred the tariffs were eliminated."

Walker cited the Japan beef example as a good outcome for the primary sector, even though dairy and beef were our only export goods which did not achieve full elimination in tariffs in the TPP deal.

The TPP roadshow heard that the deal will take about two years to implement. To proceed, the deal basically needs to be ratified by the US and Japan through their domestic processes.

Walker referred to criticism that we did not achieve all in the negotiations that we set out to achieve, particularly in dairy.

But even in dairy there are significant outcomes which will benefit exporters, he said. Dairy modelling shows a reduction of $96 million annually in export tariffs when TPP is fully introduced. For meat there is a saving of $84m.

"Those two areas – meat and dairy – were where full tariff elimination was not achieved," he said.

"On infant formula into the United States, Canada and Mexico – a high value product a number of NZ dairy companies are looking with interest at – the tariffs will be eliminated.

"Everything else – all our tariffs for originating exports – are eliminated under this agreement if it comes into effect and if NZ is part of it."

About 50% of those tariff reductions take effect on the first day of entry into force.